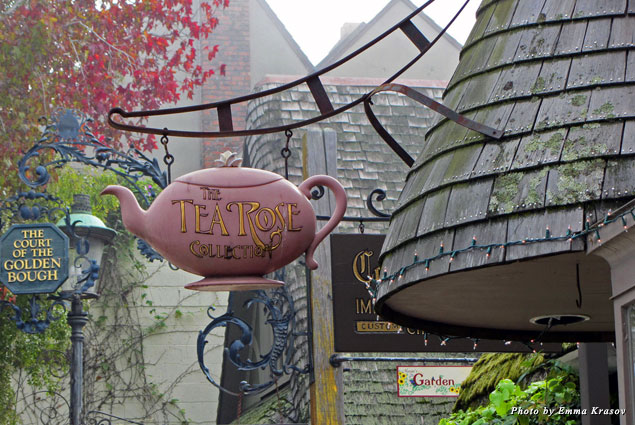 Carmel-by-the-Sea in Monterey County, California, is a fairy tale town designed more than a century ago as an artist colony, and indeed it has been visited or occupied by world-famous artists, poets, and all kinds of creative dreamers. Buildings here don’t have numbers but proper names. Gnarly old trees and cascading flowers take over the sidewalks. There are no streetlights or neon signs; therefore the city life is calm and serene, and on every step there is a quaint inn, a charming restaurant, or an alluring art gallery.

The regal Pine Inn opened in 1889 as Hotel Carmelo, the very first hotel in the undeveloped area of the newly founded city. A few years later, the entire hotel was rolled on pine logs pulled by mules closer to the ocean where it stands now, on the corner of Ocean and Monte Verde. 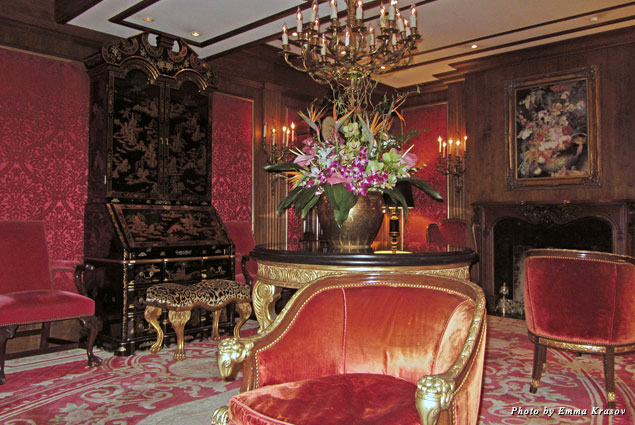 Decorated in turn-of-the-century style, the hotel lobby has walnut and silk wall panels, plush period furniture, and oriental rugs. A lacquered Chinese armoire and an imposing grandfather clock by a fireplace are in a good company of opulent gilded tables, red leather armchairs, and velvet banquettes.

The hotel restaurant, remodeled and reopened as an award-winning Il Fornaio in 1995, serves authentic Italian cuisine from different regions, accompanied by small-production wines. The adjacent bakery and deli is favored by the locals who often come here for their morning coffee. This circular café, formerly a garden dining patio of Pine Inn known as Gazebo and built in 1973, has a communal round table and a glass dome overhead, especially appreciated on a sunny day.

My room at Pine Inn had, besides the modern conveniences, some distinctly fine features: a royal bed, a walk-in closet with a mirror over a dresser, a working cast-iron radiator, and a view of the marine layer and sunset over the ocean. 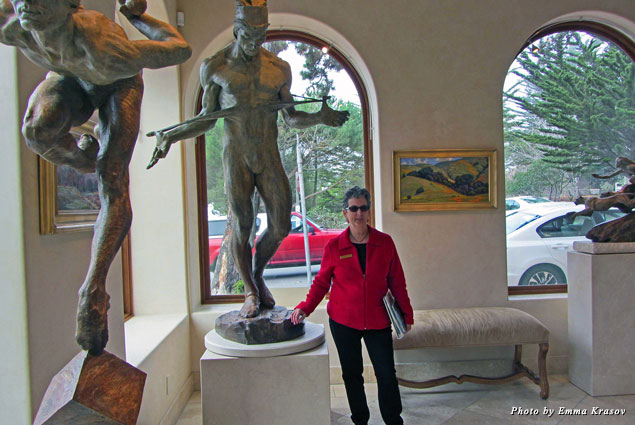 The best way to delve into intriguing historical facts and tales about Carmel-by-the-Sea is to sign up for Gael Gallagher’s Carmel Walks. This informative and enjoyable city tour starts at Pine Inn and explores small and graceful city parks, historic inns, hidden courtyards, secret gardens, and intricate pathways between them. A part of the tour is dedicated to the city’s famous fairy tale houses designed by Hugh Comstock in his adorably playful architectural style inspired by children’s books illustrations.

A fun fact I learned on the tour: In 1924, when Mr. Comstock arrived in Carmel-by-the-Sea, he was not a builder or an architect, but upon meeting his future wife, Mayotta Browne, he became “a builder of dreams.” His bride made and sold rag dolls and asked him to build a house for them—an assignment he took quite seriously. His mushroom-like dwellings, as if growing from the ground, inspired other builders, and over the years Carmel-by-the-Sea acquired its unique look.

The Carmel Walks tour also includes visits to a number of art galleries, such as the Richard MacDonald gallery, filled with his famous sculptures of human movement, or Gallery Sur, featuring photography by Helmut Horn, David L. Potigian, Winston Swift Boyer, and other artists depicting the views of the Monterey Peninsula.

Another kind of tour, provided by Staci Giovino and her co-pilot Migdalia DeNike took me and a group of wandering foodies on a Carmel Food Tour, during which we indulged in so many delicious treats it was hard to believe we barely scratched the surface of the city’s culinary bounty.

At the popular tapas-style Mundaka Restaurant we had a pairing of house-made sangria and Spanish tortilla, topped with an olive stuffed with anchovy.

Walking in between our destination eateries, we stopped to marvel at a white 1916 building with a corner tower shaped like a milk bottle—formerly a home of Carmel Dairy, from which milk bottles were delivered to wooden “milk shrines” by people’s houses. 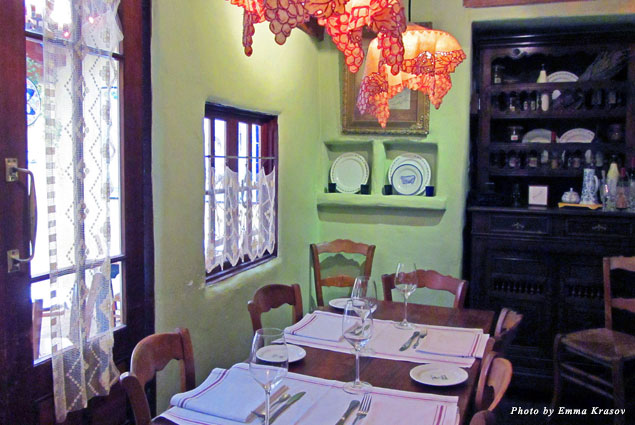 At Casanova, opened in 1977 in a house formerly occupied by Charlie Chaplin’s cook, Aunt Fairy Bird, we looked at Vincent van Gogh’s table (delivered from Southern France), at which the artist took his meals in the final days of his life. House-made tapenade with sundried tomatoes and olives and wonderful semolina gnocchi with spinach and béchamel sauce were the signature dishes of the restaurant and very much enjoyed by all.

At Trio Carmel, a specialty olive oil and vinegar shop, we tried an array of oils and balsamic vinegars infused by citrus fruits, berries, herbs, and spices to an astonishing degree of complexity.

Then at Terry’s Lounge at the Cypress Inn we had a friendly chat with executive chef Jonathan Bagley before devouring his lamb meatballs made with curry, cinnamon, and nutmeg. These melt-in-your-mouth morsels were paired with a chef’s twist on a classic Manhattan, made with bourbon, sweet vermouth, and bitters, then aged in whiskey barrels and garnished with a twist of lemon instead of a traditional Maraschino cherry.

At La Bicyclette, we ate at a private table next to a pile of wood prepared for the pizza oven. We learned the restaurant makes all pizza dough in house and tops it with seasonal, local ingredients. After sampling our butternut squash and spick pie and then another one, made with wild mushrooms and caramelized onions, I believed our guide that La Bicyclette sells between 200 and 300 pizzas a day.

At Caraccioli Cellars, we tried sparkling Rose from 2007 that was 60% Chardonnay and 40% Pinot Noir and a 2009 Pinot Noir that was all fruit coming from the Santa Lucia Highlands. Finally, at Lula’s Chocolate, we were treated to decadent truffles and sea salt caramels. 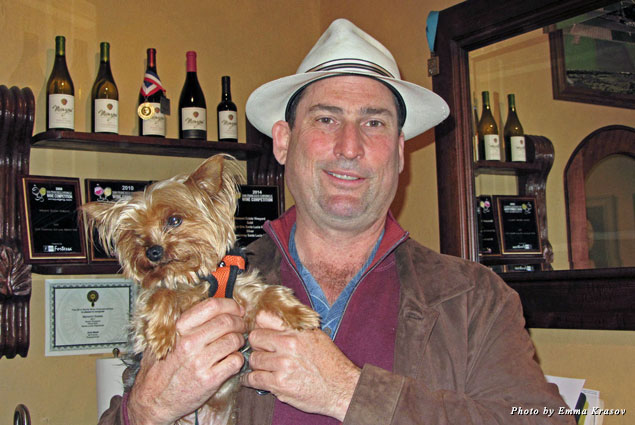 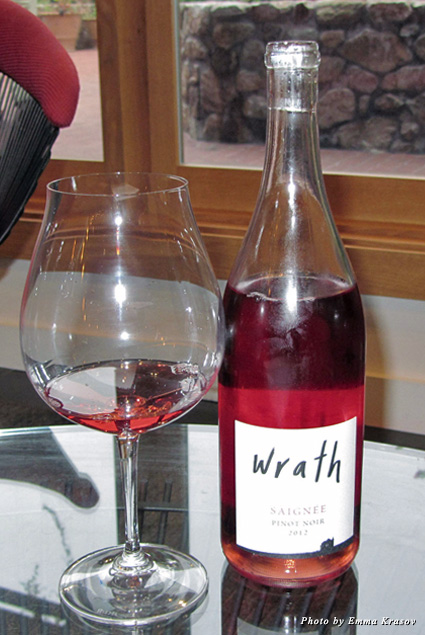 At Wrath tasting room, a newly released 2012 Saignee Rose Pinot Noir and a 2010 Tondre Grapefield Pinot from Santa Lucia Highlands caught my attention (rich with plum, wild berries, and spice). But then I tried the 2010 Noble Wrath late harvest sweet wine with an unusual and extremely pleasing peppery aftertaste. 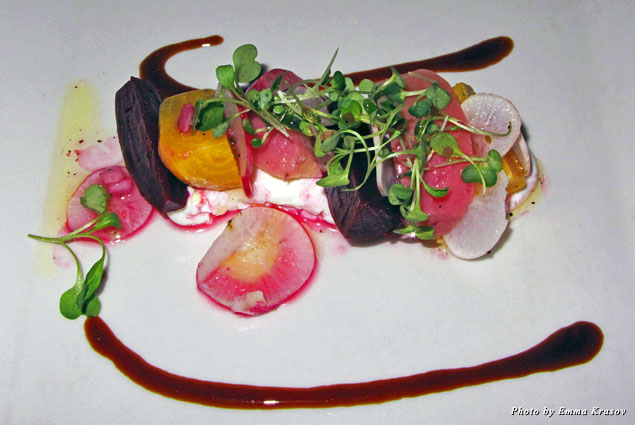 Dinner at Grasing’s Coastal Cuisine is considered by many a special occasion, even in the culinary-savvy Carmel-by-the-Sea. Freshly baked bread (and butter) is the best starter simply because it’s hot from the oven and masterfully done. My multi-colored beet salad with goat cheese, radish, micro greens, and balsamic seemed a very lucky combination of contrasting tastes and textures.

Locally farmed red abalone Dore style (egg-washed and sautéed) contained the most tender chunks of meaty mollusk placed back into its iridescent shell on top of fresh lettuce greens, heirloom tomatoes, beets, cranberry, and red onions. A dessert trio of lemon tart, almond cake, and custard sealed the sweet deal; I was totally smitten by Carmel-by-the-Sea.

Winter in California: Cracking Crab, Watching Whales, and Learning About Mushrooms Monterey of My Own

Quail Lodge & Golf Club: A Carmel Valley Haven Unlike Any Other