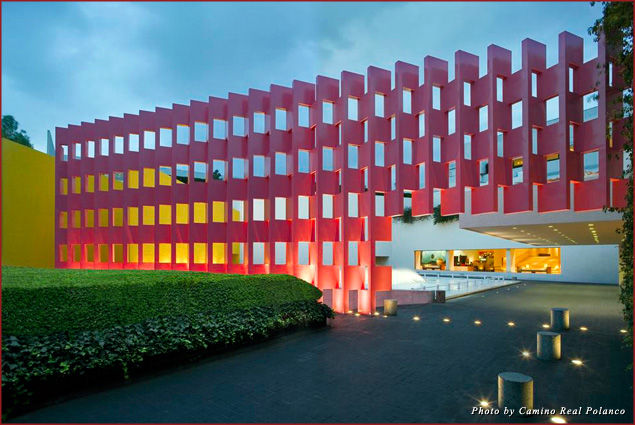 Mexico City, Mexico, to go or not to go … the pollution, the traffic, the crowds, not to mention safety. But the good news wafting across the border carried whiffs of cutting-edge restaurants, enormous parks, museums galore, and a dynamic art scene. 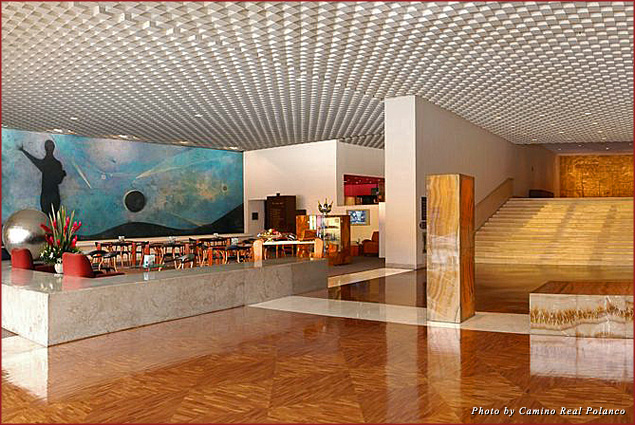 Finally curiosity trumped concerns. A few foodie friends and I would timidly tiptoe across the border for an exploratory weekend. We would stay in a super-secure, upscale Polanco hotel across the street from Chapultepec Park, tagged by Wikipedia as the largest urban park in the Western Hemisphere and affectionately called by Chilangos (Mexico City residents), the lungs of the city. 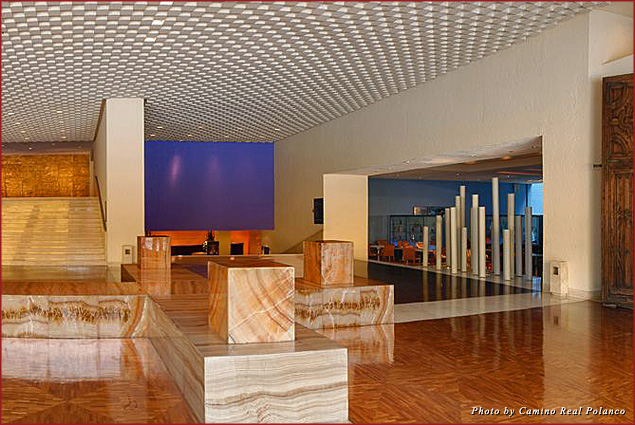 Camino Real Polanco nestles on seven acres behind a high pink wall that hides a gushing fountain in the center of a circular drive. An obscure side entrance leaves you unprepared for a white marble, palace-size lobby with a huge painting of Rufino Tamayo’s “Man Facing Eternity” on the left behind a fully wired coffee and wine lounge shop and the Blue Lounge cocktail bar on the right. The tiny business center is behind the Tamayo wall, and the mile-long reception desk hides on the next level down. The elevators require a little trek down the wide corridor beside the Blue Lounge. 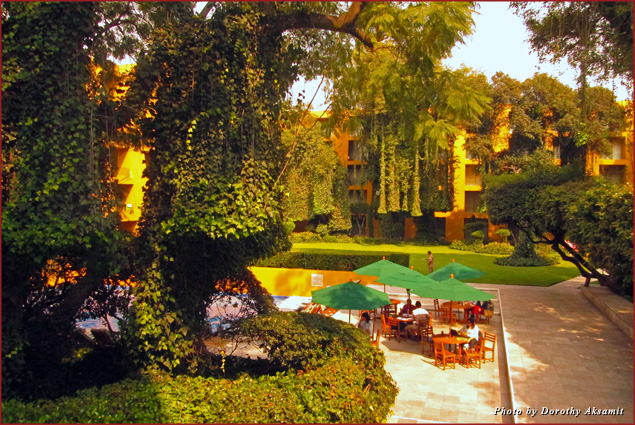 Finally settled in my garden room overlooking the pool, I was able to relax for an hour, munching on chocolate-covered strawberries and watching CNN before going to dinner. One of the reasons we had chosen Camino Real Polanco was because it had enough first-class restaurants to dine in-house every night for more than a week.

For dinner the first night we went on a culinary journey around the world by sampling six of the hotel’s nine restaurants. We started in the Blue Lounge where it was a little unsettling to find that we were going to walk on water; the floor of the lounge is constructed of glass, built over a rocky lagoon with a bubbling fountain on the side. In this blue-lit setting we were confronted with a choice of 21 martini flavors (with Grey Goose vodka), eight mojitos (with Ron Bacardi Blanco), and 10 caipirinhas, the Brazilian national cocktail and a popular carnavale drink made from fermented sugarcane juice and cachaça rum. In keeping with the setting, I choose a blue caipirinha whirled with blueberries, lemon, and cachaça. In what seemed like 20 minutes but in fact was an hour we had shed the stress of the trip and were on Mexico City time.

After cocktails and tuna tartar, we went to the third level up more wide, marble stairs where we found three themed restaurants and Token C@fe Internet Lounge. 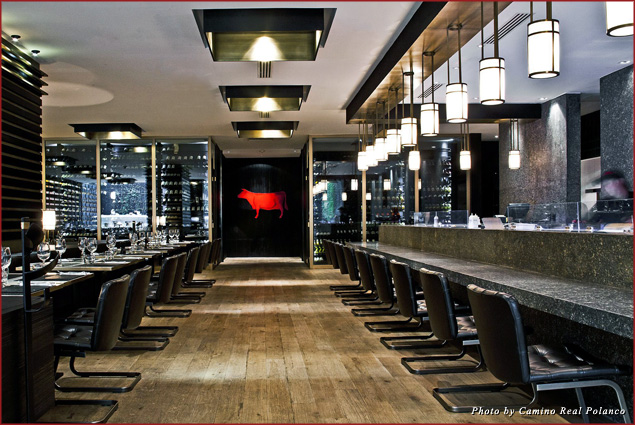 First stop was in the long and narrow, black and bronze, rather masculine Beefbar, an offshoot of Beefbar in Monte Carlo. The restaurant’s claim to fame is farm-to-table beef (even though the farm might be in the United States) and special ovens with a high temperature that leaves roasts with a crisp crust and moist interior. Nevertheless, my favorite small bite was ceviche with beef and octopus spiked with pineapple. 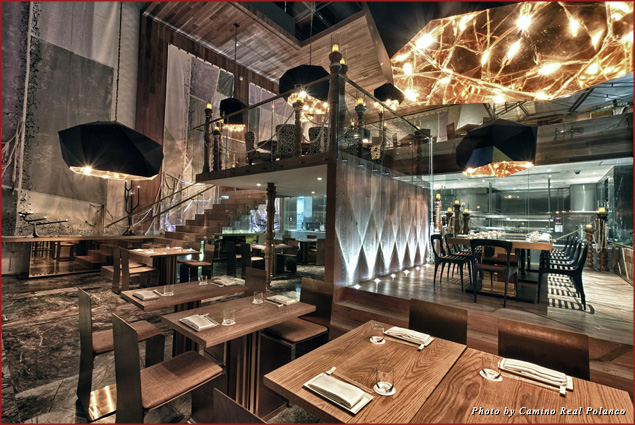 Morimoto, next door, is a dramatic restaurant resembling a Robinson Crusoe tree house on three open levels. This is the restaurant of Masaharu Morimoto, of Iron Chef fame, whose restaurants circle the globe from New York, Napa, Florida, and Hawaii to India. We watched the sashimi preparation at the open raw bar and then sampled sashimi and sake. 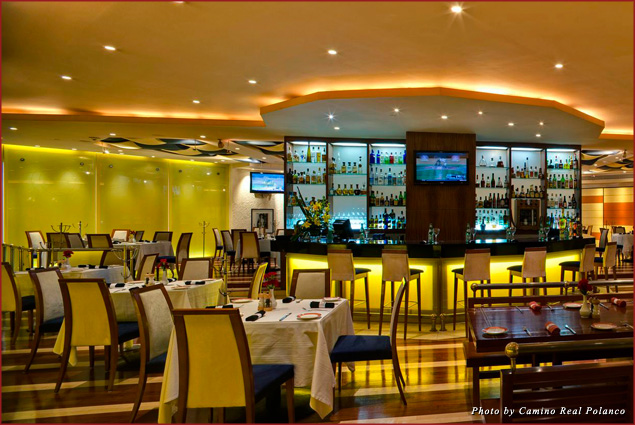 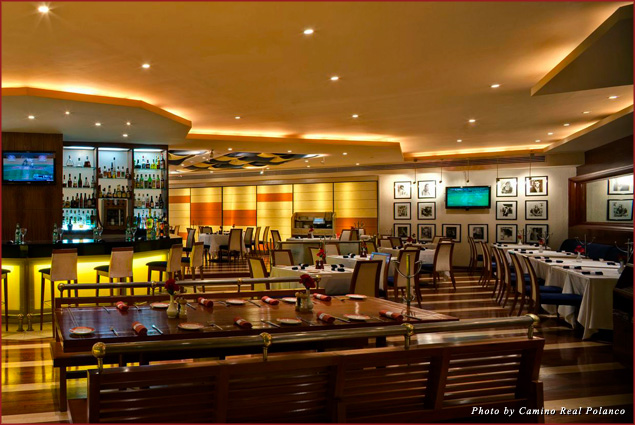 Next stop was Italy at the brightly lit Bice Bistro where we enjoyed fried calamari and zucchini, Capri-style. Open 24 hours, Bice was my choice for breakfast when I spotted an egg-white frittata with asparagus and tomato on the breakfast menu. 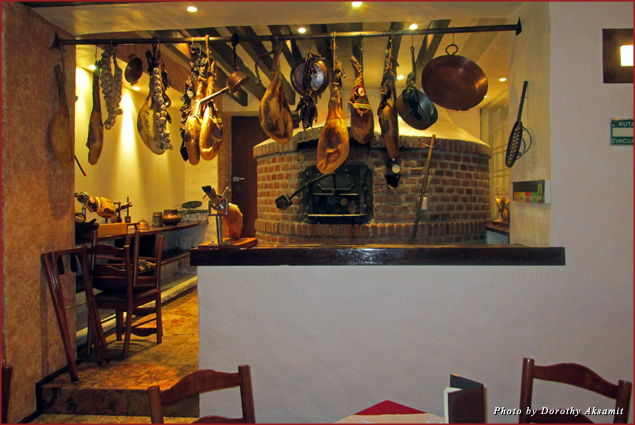 A couple of steps led to Centro Castellano for a spicy, chock-full-of-seafood gazpacho. The cozy interior with a brick kitchen complete with hanging hams and utensils took the place of a trip to Segovia.

We started back downstairs agreeing that it had been a great evening. What with getting up at four in the morning, adjusting to the altitude (drinking a liter and a half of water helped), and sampling enough wild and exotic hors d’oeuvres and drinks to last a month, I was ready to call it a night. 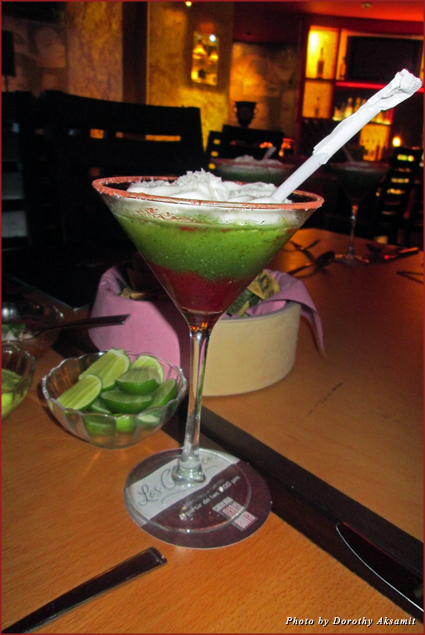 But that was not to be. Back downstairs the booming sounds luring late-night revelers came from the Cantina Maria Bonita. The cantina walls were papered in photos of Maria Bonita, a beloved actress from the golden age of movies. Center stage the lively folk band, Los Chinacos, entertained an enthusiastic audience. Most of us were comatose, having gotten up at four in the morning, but we rallied when served a salmon-colored mamey margarita followed by duck with tamarind and a good night drink of mescal. Just six hours after arrival we had journeyed to Brazil, Monte Carlo, Japan, Italy, Spain, and Mexico.

Finally I drifted to dreamland where a surreal fountain gushed endless streams of mini plates and neon cocktails. I was already moving to the beat of this cosmopolitan city.