Busing From Mexico City to Malinalco: The Good, the Bad, and the Beautiful 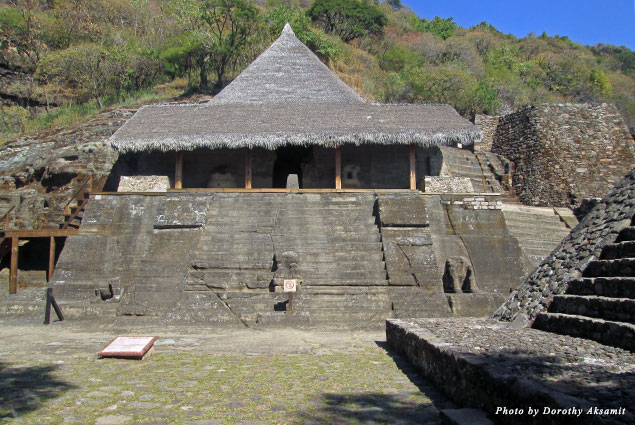 For frequent travelers to Mexico, it sometimes seems every local man, woman, and child is just waiting for a semi-literate foreigner to ask for help. That was certainly my experience during two decades of travel to Mexico … until I visited Malinalco. I can’t remember when I first heard of Malinalco, but it seemed to be a magical place even before it was dubbed a “Pueblo Magico” by the Mexican government in 2010.

Chilango (Mexican resident) bloggers wanted to tell about their delightful excursion two hours from Mexico City, but they seemed vague about exactly how to get there, and all of them cited difficult road conditions. Still, it sounded like my kind of magic: a hillside Aztec ceremonial center carved from rock, a museum containing an Argentinean archaeologist’s 30-year collection of artifacts, and a daily market surrounding the zócalo.

The desk clerk told me a bus left every hour from Metro Observatorio, but I had read elsewhere the buses left in the afternoon. I took a chance and arrived at the station at 3. The bus station was impressive, large, tidy, and organized with several stores, restaurants, and restrooms. 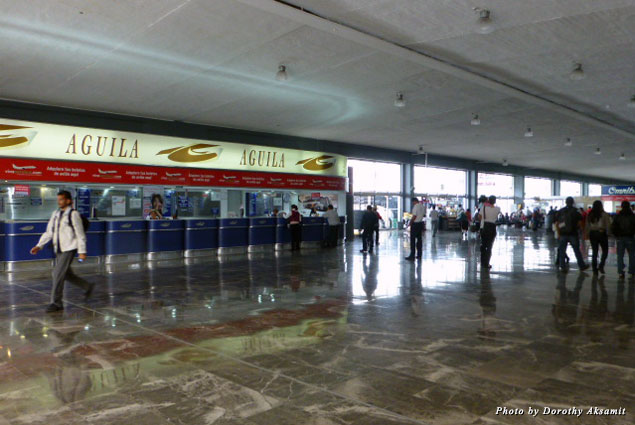 At the Aguila bus line, I learned there were only two direct buses a day and they left at 4:20 p.m. and 6:20 p.m. That was a lucky break for me, and I felt smug I hadn’t come earlier. I had enough time to get a Coke and use the restroom. Banos in Mexico usually cost four pesos and riding the metro in Mexico City costs three; it seems odd it costs more to go to the bathroom than to ride the metro….

Anticipating a crowded bus, I had the driver put my wheelie backpack in the baggage compartment. When the bus pulled out, I was surprised to see there were only half a dozen women with their market baskets. The women promptly dozed off. and I might as well have been on the bus alone. 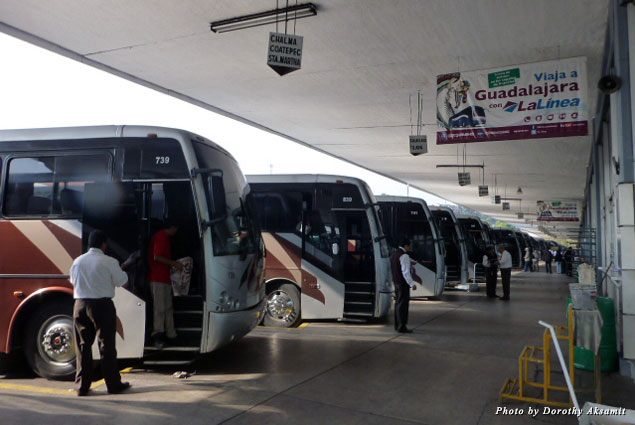 Less than an hour out of Mexico City we were in rolling countryside devoted to recreation. There were food stalls, roadside cafés, and horses and go-carts for rent. Hills got a little steeper and the pines a little thicker before it was completely dark at around 5:30 p.m. 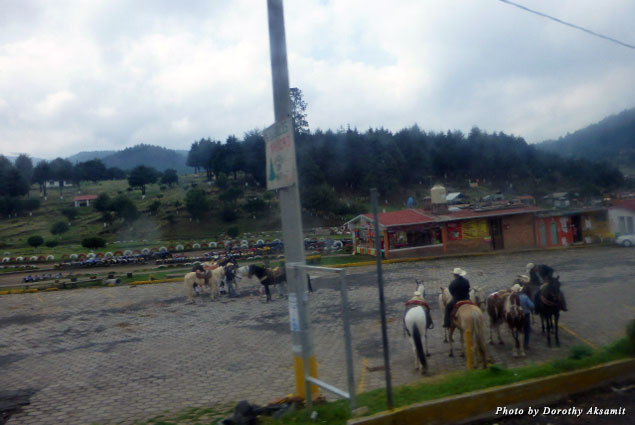 The bus didn’t exactly stop but slowed down enough so the women could exit without a full stop. The two-lane road was fine until about a mile from Malinalco, when the bus had to slalom around potholes for a short distance.

Since my ticket was to Malinalco, I didn’t worry about finding the right bus station, but, as I always do, I alerted my seat partner I was going to Malinalco. She said she was, too. Night had fallen when we entered a brightly lit town, the bus slowed, and my seat partner said goodbye and told me that this was El Centro, the center. She also told the bus driver my bag was stored below.

The bus rumbled off, and I expected to arrive at a bus station soon. But we passed through the town and started up a dark cobblestone street with high walls and overhanging trees looming in the darkness. I looked back and saw I was the only passenger left on the bus. The driver stopped the bus, looked at me, and asked where I was going. When I said Malinalco, he said we had passed through it. He also said there was no bus station.

I couldn’t believe it. With a ticket on a direct bus to Malinalco I had passed right through it. “Wait a moment,” said the driver as he stepped off the bus. After a few minutes I looked toward the back, only to find the driver, not on the street flagging down a passing taxi, but relieving himself at the rear of the bus. When he returned, I asked if he could take me back to Malinalco. No, he couldn’t, and he couldn’t stay by the side of the road any longer. 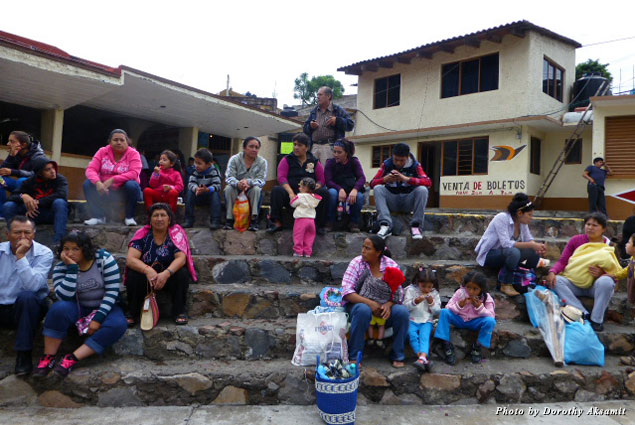 I had no option but to leave the bus and begin dragging my wheelie over the cobblestone street. A couple of taxis bumped past while I was fuming, “Why hadn’t I asked more questions? Why hadn’t the driver told me to get off at El Centro?” Finally a taxi with an empty front seat stopped and agreed I could accompany them to Malinalco. Then I learned taxis make the 15-minute loop continuously between Chalma and Malinalco. The bus driver could have taken me another 10 minutes to Chalma, and I could have gotten a taxi back to Malinalco. I was more astounded than frightened at my plight. My perfect travel world had suffered a slight blow, and I was going to have to depend less on the kindness of strangers. 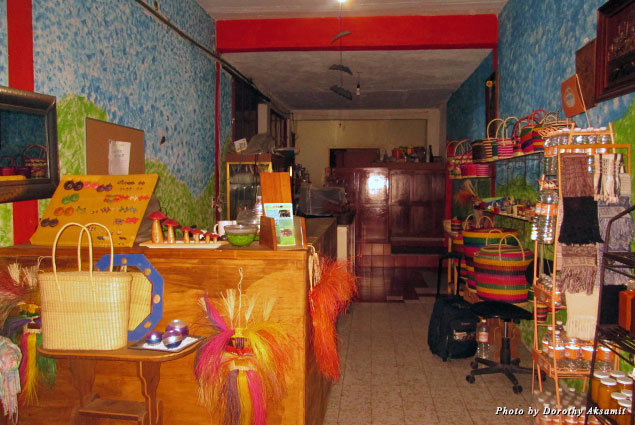 My travel world was reinstated on the return trip. The grandfather Vargas knocked on my door at 5 a.m., making sure I caught the taxi to Chalma. It was when we stepped into the street that Grandfather Vargas said, “It’s a shame you are leaving because Wednesday is the big weekly market day.” Well, it was too bad, but that settled it; I would have to return.

When I arrived at Observatorio, I waited until the few passengers—again, women with baskets—departed. Then I asked the driver how to get to a bus station to take me to Benito Juarez Airport. He told me not to take the bus since it would cost 150 pesos or more and instead take the metro, which would only cost three pesos. 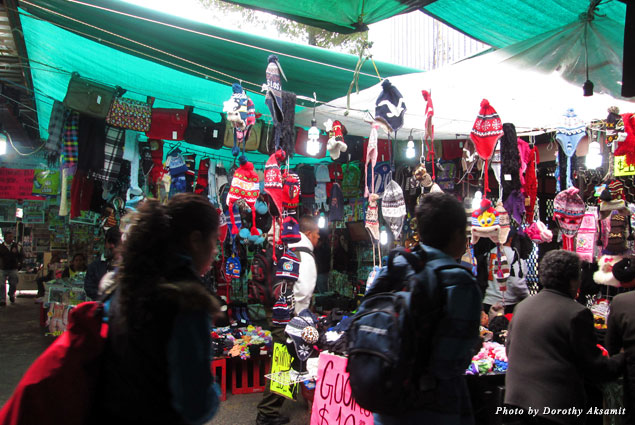 This was a little intimidating as I had never taken the metro, but the driver kindly accompanied me part of the way to make sure I followed directions. I joined the sea of humanity rushing to the metro, passing tantalizing food stalls and kiosks full of knitted hats, toys, and snacks. At the ticket booth I was told to get off at Boulevard Station, and 30 minutes later I arrived with about an hour to spare before my two-hour arrival time. I had asked the diminutive family of three smashed into the seat beside me where I should get off for the airport, and the sleepy, unshaven father said that was where they were going. I followed them up the winding stairs to the street. As the father pushed the wife holding the child into a full bus, he clung to the door and pointed to the corner where I should get a taxi for the three-minute ride to the airport entrance. 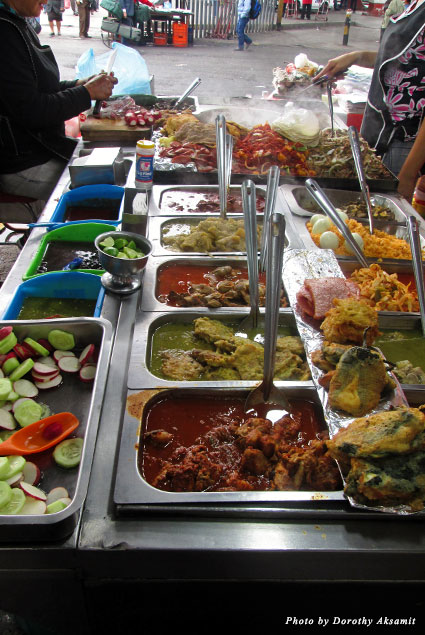 My perfect travel world was intact. It was only later I realized the bloggers and guidebook authors had probably never taken public transportation from Mexico City to Malinalco. Or maybe Malinalco is one of those magical places that travelers can’t resist talking about but would just as soon keep the details secret.

Hotel Posada Familiar is 350 pesos for a single-occupancy room. There are several room options, including with two double beds or a single and a double bed. The hotel is located at Avenue Juarez No. 113. Call +52 (714) 147-0354 for more information.

Chalma is 15 minutes away from Malinalco and has shared-ride taxis (known as taxi colectivo) leaving from the Malinalco zócalo continuously. The cost is 15 pesos.

In Mexico City, Aguila buses leave for Malinalco from Metro Observatorio (adjacent to Terminal Poniente) daily at 4:20 p.m. and 6:20 p.m. The buses, which cost 80 pesos to ride, make the return trip from Malinalco at 4:20 a.m. and 5 a.m. on weekdays; there is a 5 p.m. bus available on Saturdays and Sundays only. To get to the airport, take the metro to Boulevard Station from Observatorio. At Boulevard Station, which is just across a busy freeway, take a taxi to the airport for around 120 pesos. (There is a four-peso bus next to the metro that will let you off on the street, and you have to then walk up a long ramp to the airport terminal.)

You can also stay on the metro until you reach Metro Pantitlán, which is virtually inside the airport. However, you must go up and down several flights of stairs, which is difficult even with a small wheelie. I found it easier to take a taxi to and from the metro.

Polanco Food Tour: Street Food for the Rich and Famous—and You Finding Magic in Malinalco, Mexico