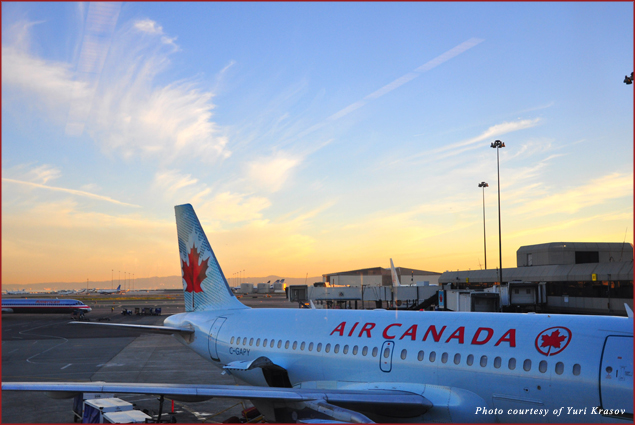 A [married] bonne femme in search of Bonhomme, I arrived at the Carnaval de Quebec, the largest winter festival in the world, during an unexpected heat wave – only minus seven degrees Celsius! A California poppy for so many years, I usually shy away from cold. How soon we forget…

On our way from Jean-Lesage International Airport, the softly falling snow, gray against the white sky, reminded me of what real winter is about. Salvatore Adamo’s “Tombe la neige” started playing in my head.

From the window of the downtown Hilton I see the St. Lawrence River in motionless silver, and Bonhomme’s Ice Palace built near the Plains of Abraham – the Carnival grounds. 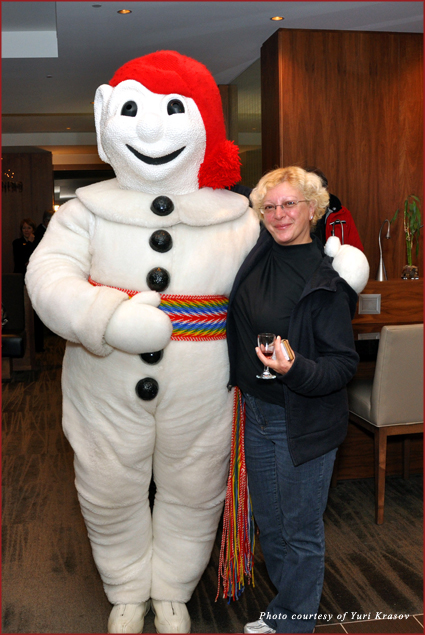 Bonhomme de neige, a human snowman, clad in a traditional red cap and ceinture fleche (arrowhead sash) is the face, body, and soul of the Québec Winter Carnival. Tall, plump, and snowy-white, he shows up in crowded places and greets his followers with hugs and blown kisses, spreading joie de vivre.

At night, blue, red, golden, and magenta lights are playing on the translucent walls of Bonhomme’s palace, which is made from sheer blocks of ice. Giant snow sculptures stand guard around the palace, across from the Parliament building and Fontaine de Tourny, gifted to the city for its 400th anniversary by a local businessman, Peter Simons.

As always, Quebec City – the jewel of Canada and a UNESCO World Heritage Site – is lovely, beautiful, and serene – even more so under its fluffy snow covers. In the morning, the last night’s serenity yields to rosy-cheeked cheerful celebrations all over town. 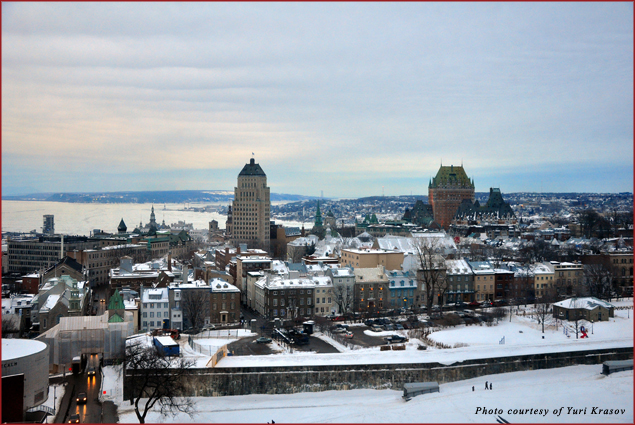 First thing in the morning, we headed to Valcartier Village Vacances, 20 minutes away from the city. Hailed as the largest winter playground in North America, this well-organized and easily accessible recreation destination celebrates over “40 ans de plaisir” – 40 years of pleasure – with dozens of slides for tubing, snow rafting, skating and ice-carting paths, and mechanical lifts.

A look at the reckless teenage crowd lining up for Everest, a 110-foot-long, practically vertical slide, made me reject that thrilling possibility right off. A high-speed-zone Himalaya didn’t seem like my kind of slide either. I dragged my individual inner tube to the kiddy slides marked green, and then joined a snow-rafting descent, and a Tornado ride in a large tube that seated eight. Oh, the fun we had while it swirled madly downhill! Nothing brings strangers together like a good adrenaline rush and nervous laughter. 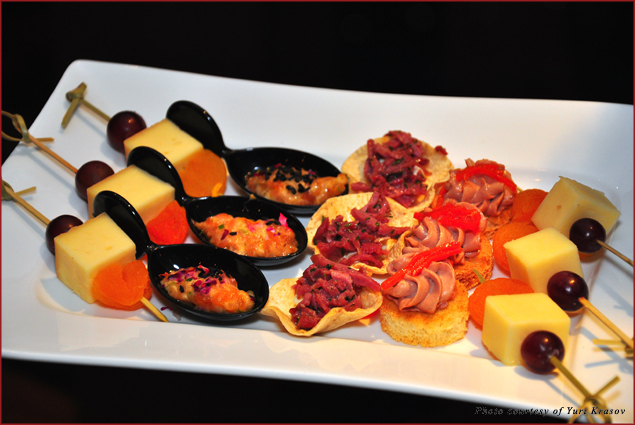 Back at the Hilton Quebec, we had just enough time to grab a bite and try some Caribou – a carnival elixir made of brandy, red wine, port, honey, and maple syrup (with possible variations).

Soon we were off to the fabled CMQ Canoe Race preliminaries in the city, along rue St. Joseph. Ice-canoe racing is definitely an extreme winter sport, and a big part of the Carnival. Teams of the best Canadian athletes, both men and women, brave the half-frozen St. Lawrence River near Bassin Louise in the Port of Quebec, and take their canoes through icy waters, floating chunks of ice, and ice-covered passages at a mind-boggling speed. 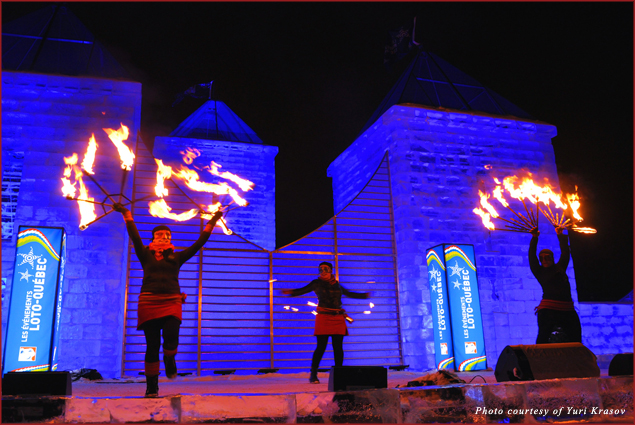 At night, festive crowds flocked to the Ice Palace, where fire dancers were performing on stage, and a combination of frosty air, loud rhythms, and Bonhomme’s short-but-sweet appearance kicked off an outdoor dance party.

The next day, we spent most of our time at the carnival grounds, feeling like a part of one big Quebecois/tourist family – among happy parents, bundled-up children, proud dog owners, well-dressed pooches, and 1,500 smiley volunteers in red parkas – always nice, kind, and attentive.

The central part of a city park, Place Desjardins, had the most attractions, like Natrel’s Great Ice Slide for the young and the bold, snow slides for rafting and tubing, dogsled rides, and Arctic spas. There was also the WestJet zip line, which I endured for the first time in my life, trying to look more dignified than I felt – an overdressed sausage sliding down a cable. A kind volunteer reassured me that I was doing fine as long as didn’t hit him on the head while landing. 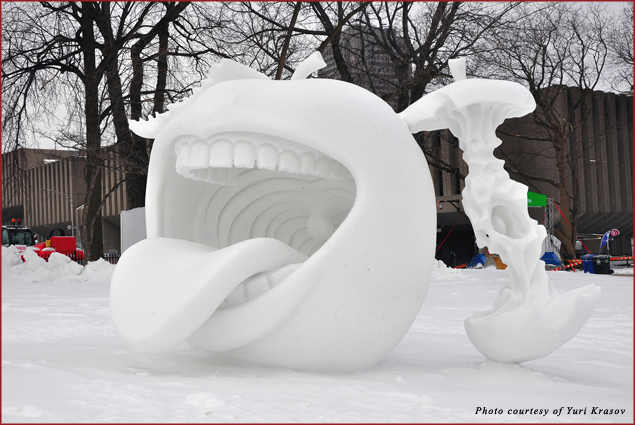 We took an “art gallery” tour of the TELUS International Snow Sculpture Competition, with some of the giant figures being built right in front of our eyes, and elaborate ice sculptures, stored in a special tent to preserve their glassy surfaces, by artist Michel Lepire and his team.

The best was yet to come. That evening, we traveled to Charlesbourg for a spectacular Carnival Night Parade with colorful floats, awash in light, marching bands in elegant uniforms, dancers, clowns, and amazing stilt-walkers. There were so many other things we wanted to see and do in Quebec on our short winter outing! 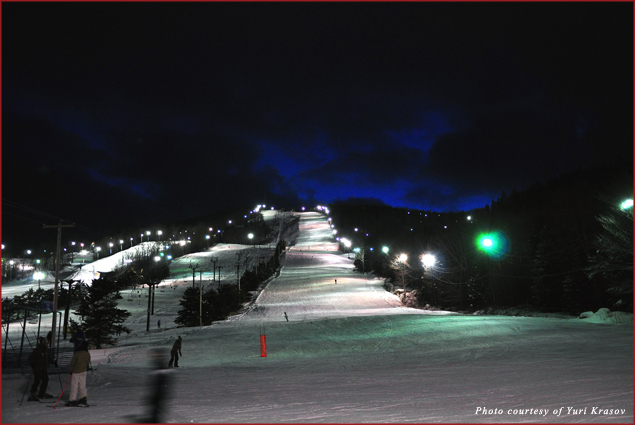 While my husband, an avid downhill skier, couldn’t get enough of the brightly lit night-time slopes of Stoneham, I preferred a snowshoe walk (once again, for the first time in my life).

On a calm sunny morning, we joined our guide at Maison de la Decouverte desPlaines d’Abraham for a briefing on the origins of snowshoeing and its popularity in high society at the turn of the last century.

After we put on our old-fashioned snow shoes (with ash frames and leather lacings) and arrowhead sashes for aesthetic purposes, the snow-covered park became immediately accessible and wonderful to walk through at a leisurely steady pace. On our way, we passed the Pentathlon des Neiges area with its 500-meter skating oval. Penthatlon goes on through the end of February, and includes winter cycling (2 to 15 km), jogging (1 to 6 km), skiing (3 to 9 km), skating (3 to 9 km) and snowshoeing (2 to 6 km). 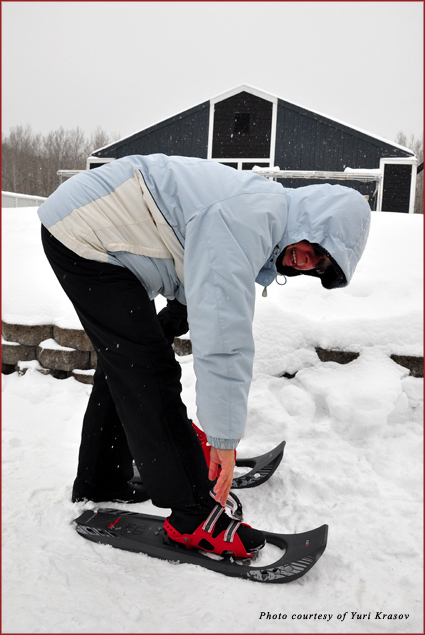 I enjoyed my first snowshoeing experience so much that the next day we signed up for a Rand orienteering adventure in Lac-Delage, a beautiful woody lakeside, with the Le Manor du Lac Delage resort at the heart of it. Orienteering involves finding your way across unfamiliar terrain using a map and a compass. This time, we were wearing modern aluminum-frame snowshoes, more compact and easier to walk in when heading up- or downhill. I had to brush off my middle-school knowledge of the compass and, under our guide’s strict supervision, follow the azimuth – the arc of the horizon –exactly, which involved plenty of climbing through the trees and up and down the rocks. The forest was white and quiet, the snow was falling beautifully, and no one seemed to mind all that straying away from the beaten path.

A delicious lunch at the resort’s Restaurant Le Gourmet Champetre seemed like a well-deserved reward after our orienteering adventure. And then there was a visit to the fairy-tale Hotel de Glace (where I didn’t have the nerve to stay overnight). The only North-American ice hotel on rue de la Faune on the site of a former Zoo is an architectural and artistic wonder, even though it exists only through the last weekend in March. 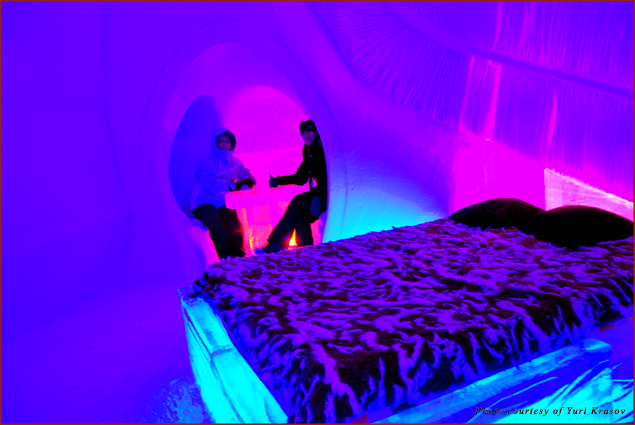 Featuring impressive rooms, suites, and common areas, the hotel is decorated with ice and snow sculptures with a theme of biodiversity. There is a frog suite, and a butterfly suite, and an apple bar, all made of ice and decorated with cold-to-the-touch LED lights in brilliant colors.

Having a vodka and cranberry shot from an ice glass in the bar while sitting on an ice barstool by an ice table, I couldn’t help but feeling I was somewhere on a movie set. Alas, the ice hotel was the last stop on our journey. The next day, we boarded Air Canada for a return flight home. La vie n’est pas du cinema… ciao bambino, sorry!

Drink, Eat, and Stay Fit in Quebec Flying to Québec, Walking Into Paris