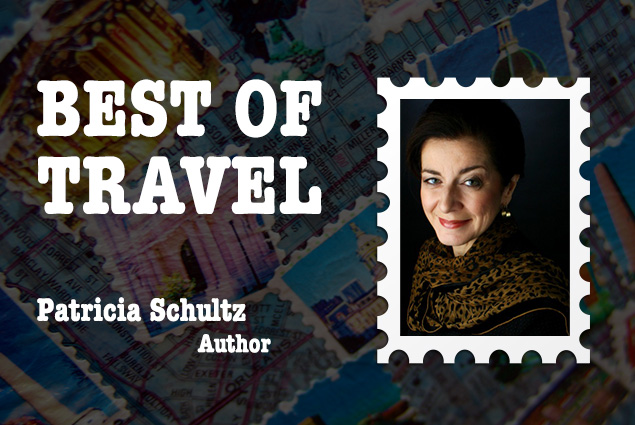 The Travel and Adventure Show, which will be at the Donald E. Stephens Convention Center outside of Chicago this Saturday and Sunday (January 17-18), brings together some of the top names in the travel industry, along with tourism boards, chefs, and cultural performers, to inspire attendees to see the world. As part of the two-day event, Patricia Schultz, television producer and author of “1,000 Places to See Before You Die,” will share with attendees her passion for writing and travel.

We were curious to know more about Patricia’s adventures around the world, so we asked and she answered! Get ready to learn more about this expert traveler:

Q: When you research a destination, what do you look for? What activities/attractions tend to catch your eye?

A: I can stumble upon just about anything when I am researching; every destination offers up its own surprises and offerings. I tend to look for what that city or place is known for—Art Deco architecture, jazz, sake production, lace-making—and then see what the tie-ins might be, such as annual festivals, museums, shopping, etc. But I try to understand the bigger picture—not just the town or city alone but the country or wider region as well.

Q: If you were planning a round-the-world trip, what five countries would you want to be sure to visit?

A: Well, different travelers would call for different round-the-world combinations (some tickets allow up to 15 stops). If leaving from the East Coast, five predictable choices might be London, England; Istanbul, Turkey; New Delhi, India; Beijing, China; Tokyo, Japan; and then back to the US. But my own personal itinerary of five—allowing a revisit to some longtime favorites—would be Amsterdam, Netherlands; Cairo, Egypt; Singapore; Wellington, New Zealand; and Mexico City, Mexico. The combinations are endless!

A: Back in the day I would only need a few days to get my act together for a long weekend (or longer) trip to Europe at the sight of a heavily slashed airfare that was too good to refuse. I’d go anywhere the airfare sale was the most attractive—I wanted to see it all!

Q: What is your favorite island to visit and why?

A: Islands are commonly perceived as tropical idylls with sandy beaches and waving palm trees. I have so many favorites that fill the bill: Bora Bora, a host of Caribbean choices, Agra dos Reis near Rio de Janeiro, etc. But other islands are about far more than just the beach: the San Juan Islands off the coast of Seattle; Tasmania off of southern Australia; Sicily, which is a world apart from mainland Italy; Scotland’s Hebrides Islands … I could go on!

Q: If you were stranded on a deserted island, what five things would you want with you?

A: There would be no Wi-Fi but my Kindle loaded with a library of books and my iPod with an eclectic mix of world music; sunscreen; basic shelter (with a view) from the heat and elements; and a fully stocked kitchen with an award-winning chef to keep things interesting. This is a fantasy, after all!

Q: Where is one of the more unusual places you’ve stayed when traveling?

A: I wound up in Venice one year during Carnivale, and there wasn’t a room to be had. The manager of one of the hotels I had contacted felt so bad for me, he called around and found an empty apartment that belonged to a friend of a friend—an unfurnished, cavernous apartment in an 18th-century palazzo that was big on character but low on heat. I’m still convinced there were visitors there from centuries past.

A: In its early days, I tried zip-lining in the forests of Costa Rica where it is said to have originated years ago. But in the cloud forests of Ecuador, up in the Andes outside of Quito, the beautiful eco-lodge called Mashpi has designed something even better: a Sky Bike that you pedal across a gorge, suspended from a cable that stretches 600 feet across the void. Immersed in the mist and enveloped by the sound of canopy life, it is so surreal I didn’t even think about the distance between me and Mother Earth far below me.

Q: Where is your favorite place to spend a long weekend?

A: When it is off-season in Europe and airfares are at an all-time low, I love to spend time in its great cultural capitals—London, Paris, Berlin, Rome, Madrid, etc. There is minimal tourism and it feels like a much more authentic experience. It is less congested meaning no lines at the museums, restaurant reservations are easier to come by, locals appear less stressed, hotel rates are discounted. The weather is not bad, often better than what I’d have back home in New York City, and there are plenty of cultural events and exhibits to keep you indoors and happily occupied.

Q: What is one destination you keep returning to again and again?

A: Italy! One of the most influential (on so many different levels) things that I have ever done was to live in Florence for three years after university. I combed the country on weekends and explored its nooks and crannies. But the more I saw, the more I realized I’d never be able to see everything offered by this country so jam-packed with treasures and attractions. Its lifestyle is something unique to Italy, and I have returned time and again. I just can’t get enough of Italy. Giuseppe Verdi stole my quote: “You may have the universe, if I may have Italy.”

A: It is so important for young people to travel more, and cost is always the largest—sometimes the only—deterrent. I wish passports and visas were discounted for them, and other expenses waived entirely. Study abroad programs can be quite costly; I would love to see those fees substantially reduced as well. Experiencing the world and its people when young and impressionable can be an experience more precious than conventional academia itself. Combining the two should be everyone’s goal.

See Patricia and the other headlining speakers this weekend at the Chicago Travel & Adventure Show—get tickets for just $9 with the promo code “JETSET”!