Berkeley Rep Debuts a New Book for the Bible 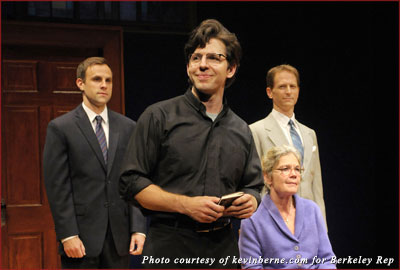 The “New Book” is written by award-winning playwright and Jesuit priest (which one’s the day job?) Bill Cain, who readily admits that his book—and now play—contains little to no fiction. The protagonist’s name is Bill Cain, and his mother, father, and brother are named after and resemble the author’s closest relatives.

Among all the contemporary books and plays on family relations and/or end of life, what sets “How to Write a New Book for the Bible” apart is its lightness in terms of mood and humor, and some wonderfully reasonable remarks on parent-children dynamics and grown children-parent acceptance that comes with compassion and age.

A witty comparison between Mary Cain, the mother of Bill, and Mary, the Mother of Jesus Christ comes to the conclusion that the former did what the latter couldn’t – she brought the beloved son home – even if it took her dying to achieve the goal.

There are too many funny, profound, and poignant moments in the four-actor play, directed by Kent Nicholson, to mention even some of them and not miss equally important others. As is always the case with Berkeley Rep, the best way to get inspired is to come and see it as soon as possible. A very talented ensemble of actors makes every minute of the stage action significant and attentively absorbed by the audience. Tyler Pierce plays Bill, Linda Gehringer plays Mary, Leo Marks plays Pete and other roles, and Aaron Blakely plays Paul and other roles. There is also a fantastic set by scenic designer Scott Bradley.

For the first and obviously very successful show of a very promising season, come to Berkeley Repertory Theatre at 2025 Addison Street in Berkeley. Call for tickets and information (510) 647-2917 or visit their website.

Image: courtesy Berkeley Rep. Aaron Blakeley, Tyler Pierce, Linda Gehringer and Leo Marks star in the world premiere of Bill Cain’s How to Write a New Book for the Bible at Berkeley Rep.