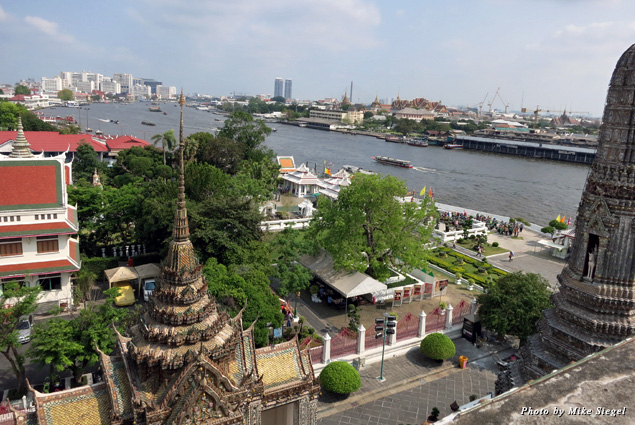 Bangkok is a town that comes with some baggage. Its reputation as a bastion of wild (and often seedy) nightlife has been fed by movies like “The Hangover II” and “Bangkok Dangerous.” Likewise, its recent political protests have added to the misconception that Bangkok is a place best avoided, or at the very least passed through quickly on the way to somewhere else.

But give Bangkok some time and attention and you’ll find something for everybody. If nightlife and naughtiness is your thing, yes, Bangkok is world class. But the city also has fine hotels, top-notch shopping, numerous cultural and historical sights, and, for my money, some of the best food in the world. All hosted by friendly locals who give Thailand its nickname: “The Land of Smiles.”

This was my third trip to Bangkok, and I admit my previous visits to the Thai capital didn’t exactly paint me as a culture maven. The first was a drunken haze of a weekend common to many a young backpacker. The second was a one-night layover in 2011, gorging on cheap food to the point of illness before catching an afternoon flight to Phuket the following day. Looking back, I’m sorry I didn’t give Bangkok more time to impress. 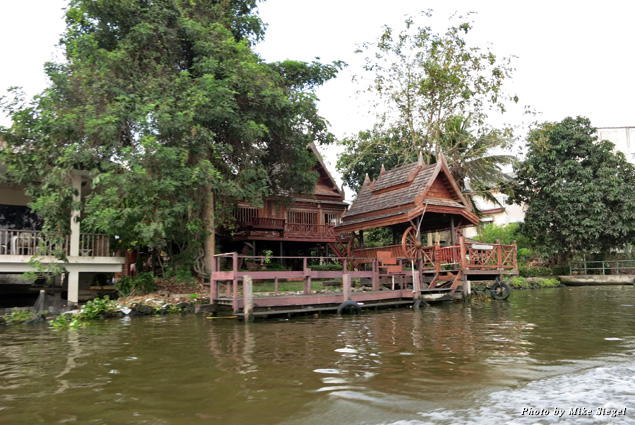 This trip, however, would be different. I was invited by the Tourism Authority of Thailand (TAT) to take part in a weeklong, multi-city tour in March, four days of which would be spent in Bangkok.

Granted, the first night barely counted. After a 14-hour-plus Thai Airways flight from LAX with a brief stopover in Seoul, I arrived in Bangkok at just before midnight on a Tuesday evening. This meant that after clearing customs, immigration, and baggage claim, we got to the hotel at 1:30 a.m.

Centara Grand Hotel, part of the huge CentralWorld shopping complex and Bangkok Convention Centre, provided my long-awaited accommodation. The two-story lobby is on the 23rd floor, and the views only get better from there. The hotel features 505 rooms, a full spa, a gym, a gorgeous pool, and nine restaurants and bars, two of which are on the top two floors (55 and 56) for amazing 360-degree city views at night.

As the name would imply, the hotel is smack dab in the center of the city, connected to the huge convention center and with direct access to the BTS Skytrain system. It’s ideal for the international traveler, especially one prone to shopping. The CentralWorld shopping complex is the biggest in Bangkok, with more than 500 stores and 50 restaurants.

I was particularly impressed with ZEN, a seven-story department store that not only carries the hottest local and international clothing designers but also toys, furniture, accessories, and everything in between. And it does it with a fun vibe; the place is loaded with quirky sculptures and displays and often features a DJ spinning the day’s shopping soundtrack. It’s worth checking out. 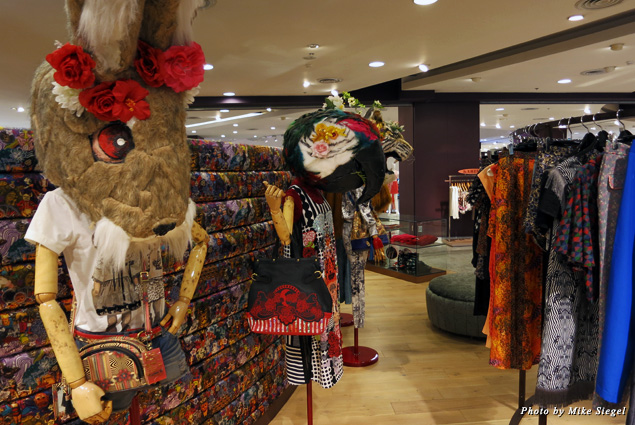 Eventually we had to leave the air-conditioned comfort of our hotel/shopping complex and venture outside. Oh, have I mentioned the heat? Bangkok is always warm, but my previous trips had all been during the more temperate (for Bangkok) months of December and January. I discovered that March and April are the hottest months in Bangkok, with daytime temperatures hovering in the 90s and humidity just as high. Pity the fool tourist who attempts Bangkok without air conditioning in his or her hotel room.

Luckily, our tour came equipped with a driver and a sparkly new van. Even though the hotel was centrally located, it was not uncommon for us to spend a half hour in the van to go sometimes only a handful of miles; the streets are packed with traffic. Combine that with the heat slowing down your walking pace and one realizes quickly that it’s best not to try to plan too much into the day. Leave yourself time and don’t rush it.

The first stop on most Bangkok tourist lists is invariably the Grand Palace, established in 1872 and consisting of not only the Royal Residence and throne halls but also some government offices and the famous Temple of the Emerald Buddha. Will you be surrounded by busloads of tourists from around the world snapping photos and walking into your shots? Yes, but that doesn’t mean it’s not worth seeing, if only for the ornate and colorful temples and monuments. There are also huge tapestries and artwork depicting all aspects of Thai history. Paying a little extra for a guided tour is worth it to really appreciate what you’re observing. 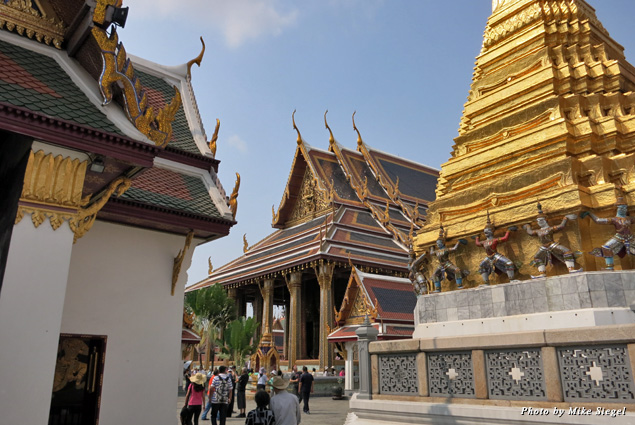 After an hour or so spent at the Grand Palace, the next stop was the nearby Temple of the Reclining Buddha, known locally as Wat Pho. The massive statue of Buddha at rest is 49 feet (15 meters) high and 161 feet (49 meters) long. The soles of the Buddha’s feet show 108 images inlaid with mother-of-pearl. Be sure to toss a few coins in some of the bronze bowls behind the statue on your way out; the money helps the monks maintain the Wat and is also said to be good luck. 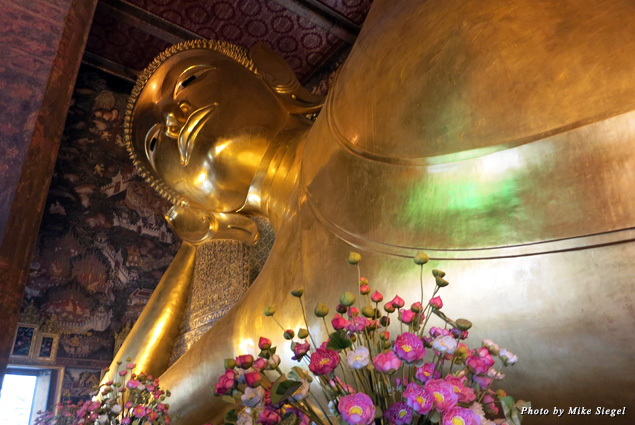 Walking around in the heat can sap the energy out of a person, so after lunch we were treated to traditional Thai massages at the Oasis Spa. As the name implies, it’s a peaceful haven tucked into a small side street in the city center. The sounds of the traffic melted away, along with my tension and back pain. Newbies beware: Thai massages involve more stretching and kneading than a typical Swedish massage. If you want soft and relaxing, be sure to let them know beforehand.

It would be impossible for any article about Thailand to not mention what I believe to be the country’s great gift to mankind: the food. Thai cuisine is recognized as one of the world’s best for a reason: They take their food seriously. It may be why Thais seem to be snacking all the time; with food this good, why wouldn’t they? To visit Thailand and not indulge in the local food would be a crime. 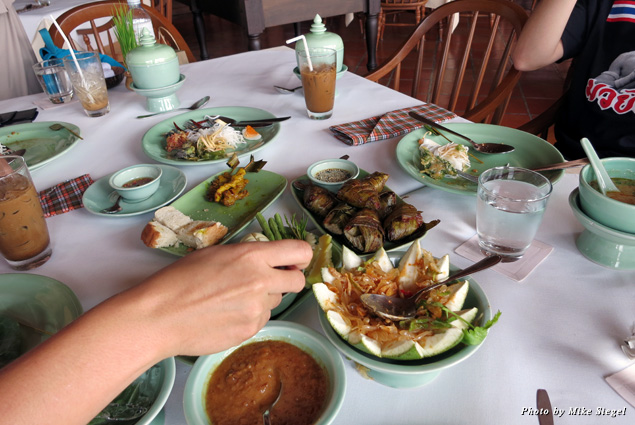 One of the common fears Westerners who have never tried Thai food (really?!) have is that it will be too spicy. Relax. Simply ask the waiter which items are not spicy. Believe me, they are accustomed to cooling down their dishes for tourists. Vegetarians will have no problems finding menu options anywhere in Thailand, and for those with a sweet tooth, check out the local desserts. I’m especially fond of the sticky rice with mango and sweet condensed milk. Be sure to save room for the coconut ice cream.

As night fell, my old Bangkok instincts started to creep in for a cool alcoholic beverage or two. Or three. But no, I’m on assignment. However, one place we did go for a drink was the popular club Vertigo on the rooftop of the 61-story Banyan Tree Hotel. This may be the best view in all of Bangkok. Sure the bar charges swanky hotel prices, but it’s a beautiful spot for a nightcap and may be the best (and sometimes only) place to catch a cool breeze in Bangkok. 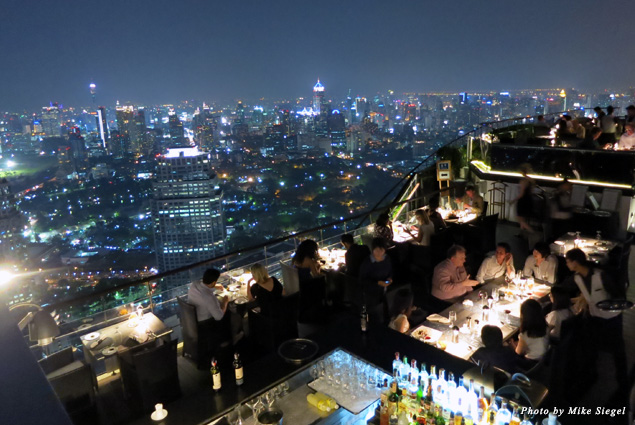 The next morning, we took a boat ride along the many canals that meander through the city. Seeing large hotels and office buildings blend into houses, temples, and dilapidated shacks along the river was like slowly stepping back into Bangkok’s history. It was a view few tourists get to see and worth an hour so if you can swing it.

The boat dropped us off at what might be Bangkok’s third busiest tourist site after the Grand Palace and Reclining Buddha: Wat Arun, also known as the Temple of Dawn. The main feature is the approximately 250-foot (76 meter) pagoda encrusted with porcelain and seashells. It’s intricately decorated, and those who climb its steep steps are welcomed with sweet views of the city and Grand Palace across the river. 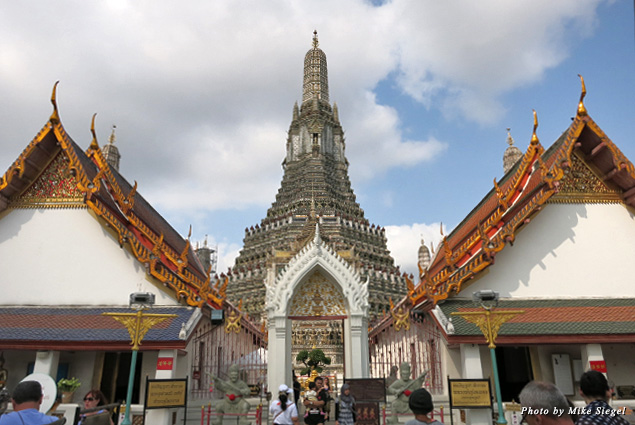 Then came a visit to the Jim Thompson House & Museum. An American and former CIA agent, Thompson came to Thailand in the 1950s and revitalized the country’s silk industry, becoming a local legend and wealthy to boot. He died under mysterious circumstances in 1967, and his family opened the home to visitors; it now boasts a clothing store and a surprisingly decent restaurant. Adult admission is 100 baht (approximately $3), and all tours are guided. The tour takes about 20 minutes, and while I was glad I went, I found the story of the man more interesting than his house. It made me want to check out his biography.

That evening was spent at a long-running tourist attraction, Siam Niramit, a sprawling complex that features mock Thai villages, traditional arts and crafts, music, street performers, and carnival games. Its most famous attraction is the live theater show at 8 p.m. every night—a Cirque du Soleil-sized extravaganza on a humongous stage, featuring hundreds of cast members (many flying on wires), live elephants, a flowing river, and special effects.

The show is big for sure, but it and the grounds were all a bit too Disney for yours truly. I suppose it’s a way to quickly grab a Thai culture overview if you don’t plan on actually getting out and seeing much of the country outside of Bangkok (or Phuket, the show’s other location). It’s family-friendly for sure, but it’s just not up my alley.

We saw a different stage show on my final night in Bangkok, “Muay Thai Live: The Legend Lives.” It’s a new show playing at a theater in Bangkok’s spiffy Asiatique riverfront shopping and entertainment complex. The storyline honors the history of Thailand’s legendary sport of Muay Thai kickboxing, but the real selling point is the fighting. Well … almost fighting.

Those going to the show expecting actual bouts will be disappointed, as the action is strictly stage fighting complete with “whoosh/pow” sound effects. Taking nothing away from the performers, who are very skilled martial artists, but the show is to actual Muay Thai boxing as Medieval Times dinner restaurants are to actual jousting. Twelve-year-old me probably would have loved it, though.

As for Asiatique, kudos to the Bangkok city officials for turning what was a dilapidated warehouse district on the river into a prime social spot with hundreds of shops and multiple bars and restaurants. It would have looked at home in most US cities, which may be why it’s a popular change of pace for Thai locals. But for me, it’s scrubbed-clean freshness reminded me a little too much of home.

I then realized that while I certainly enjoyed my chaste, comfortable few days in Bangkok, complete with beautiful hotels, fine restaurants, and air-conditioned vans, a part of me missed that other Bangkok—the one with sidewalk food carts, hustling tuk-tuk drivers, late-night bars, and Muay Thai fights with real punching. Maybe next time (and there will be a next time), I’ll mix the two worlds a bit.