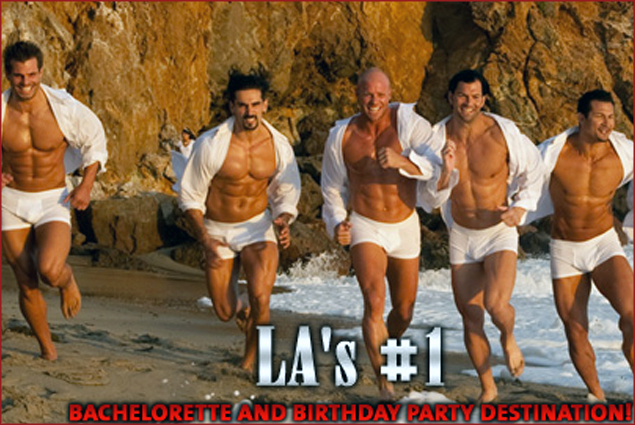 It’s raining men. Remember that episode of Real Housewives of Beverly Hills when Lisa, Taylor, Pandora, and friends head over to Chippendales in Vegas for Pandora’s bachelorette party? Well, you don’t have to drive all the way to Vegas to have a little girlfriend fun. Right here at Hollywood and Highland, the Hollywood Men have been “Viagra for Women” (their words, not mine) for more than 17 years.

I was introduced to the male review when one of my best friends, Amy, wanted to go to Hollywood Men for her birthday. It was a good choice. Between the male eye candy, the all-female audience, our VIP booth, and the flowing drinks, I think it’s a great way to let your hair down and celebrate a birthday, or of course – the Bachelorette Party.

I sat down with co-owner Dan Remington to get the inside scoop on all things Hollywood Men.

What is Hollywood Men?

We offer an upscale male revue, where women can come with their girlfriends and admire (and just as often be admired by) good looking men. I co-own the company with Scott Layne and our home stage at Hollywood and Highland puts us smack-dab in the revitalized Hollywood area. It’s the Las Vegas of LA. Between the tourism, location, and cool new neighborhood offerings like the new Iris Cirque Du Soleil, it’s a great spot for our show. And of course, there is lots of parking, which in Los Angeles, is always a plus.

Who are some of the most popular dancers?

Gustavo is one of our featured dancers. (Note: Gustavo was the specific reason that Amy wanted to see the show.) He is a Brazilian model and actor, and is a star in his hometown of Rio de Janeiro. Our customers love him for his smile and his character – his personality comes through when he performs. He is the star of the Latin Act, and he has incorporated a bit of capoeria in as well. (Another note: Amy just thinks he’s super hot.)

Marcus is another popular dancer whose roots are as a world-class martial artist from Europe. He does our Matrix Act. (Note: Who can forget how HOT Keanu looked in his leather jacket?) He’s also a model and actor and with his mixed-race background and danceability, it’s obvious why he’s so requested. They also tell us that his abs are incredible.

Do you have a lot of tourists coming to see the show?

Yeah, I’m a little blown away by how many Chinese and Japanese tourists come in large groups. We also get groups coming from England and Canada, and of course, surrounding California areas.

And not only do we have international visitors come see us, but we’ve actually toured the show internationally.

In 2009, we went to Romania. The Romanians were very nice, down to earth people. They had never had a male revue show, and we were literally on every news and radio station. We had a personal bodyguard and police escorts. On the last day, we wanted to do something nice for the children who lived in the orphanages and we held an event at the mall where over 2,000 people came out and supported us and this cause that we cared about.

Last year we took the show to Papeete in Tahiti. Like Romania, I fell in love with the people but it was the beauty that blew my mind. It’s surreal. There were no clocks, the sense of time was so different. Everyone had such a kick-back, chill attitude. I felt at peace. And all of the fresh-squeezed juices, like pineapple and papaya, kept us all in shape. There were flowers everywhere. Close to 900 people came out to see our show and we plan to go back in March 2012.

Who comes to see the show?

Women who want to celebrate with their girlfriends. Everything from birthday parties to bachelorette parties, and we’re seeing more and more divorce parties. We also just see ladies who want to have an awesome “Girls’ Night Out.” We offer food and beverage service and there is even dancing afterward. If someone wants to go all-out, we can help them with everything from limo service to hotel deals.

This is Hollywood, so do you have any high-profilers that have come to see the show?

There is a new movie Magic Mike coming out with Channing Tatum, and he came in with two other actors who did a little research for the upcoming movie. Some of the cast from Bridesmaids came in (covertly); people from Conan and Jay Leno gave us a little coverage. Our troop was on America’s Got Talent, and Channel 9 did a segment about how we are fun way to have a Girls’ Night Out.

That makes sense, you have been around a long time…

Yes, we’re celebrating our 17th anniversary. I’m planning to do a special show sometime in February. We’ll feature even more dancers and an extended show … maybe we’ll even bring back some of the “classic” acts.

For more information about their anniversary party; or to book your birthday, bachelorette or divorce party, call Dan at 818-845-6636 or visit their website.