Arizona in Spring: The Biltmore 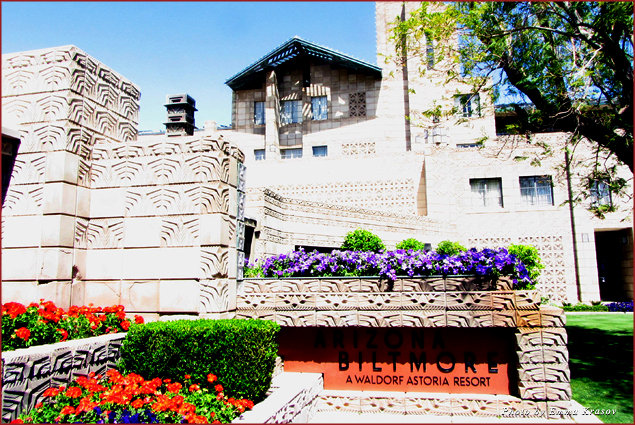 Escaping the chilly rainy spring of San Francisco, and still clad in a sweater and jacket, I landed in sunny Phoenix, Arizona, looking like your typical snowbird among the tanned poolside lemonade-sipper. The assault on all of my senses was overwhelming and rather glorious. 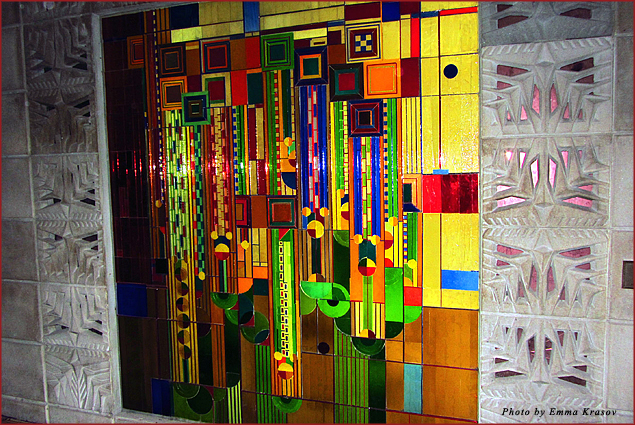 The warmth, the cloudless sky of pristine blue, the orange trees overloaded with fruit, the royally purple petunias emanating their sweet aroma up into the air, and the majestic fairy-tale castle that looked as if it was constructed out of sugar cubes – I’ve arrived at the Arizona Biltmore, a Waldorf Astoria Resort.

Conceived by the McArthur brothers – Albert, Charles and Warren – the luxurious winter retreat for the rich and famous was built in 1929 on 200 acres planted with orange groves and washed in the desert sun right outside of Phoenix. 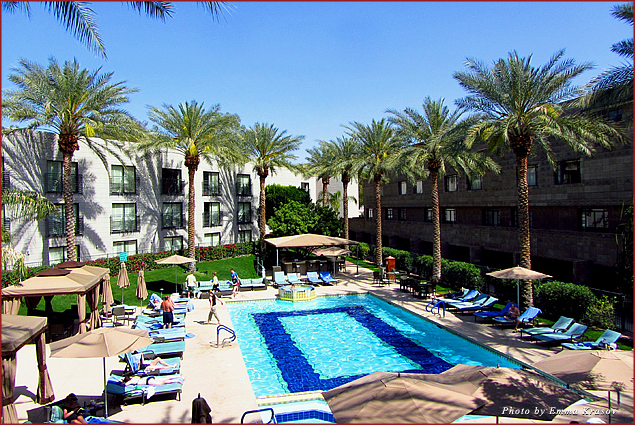 Albert Chase McArthur, a one-time apprentice of Frank Lloyd Wright, not only followed his mentor’s ideas, but invited the world-famous architect, who called Arizona “a vast battleground of titanic natural forces,” to be his consultant on the Biltmore project. 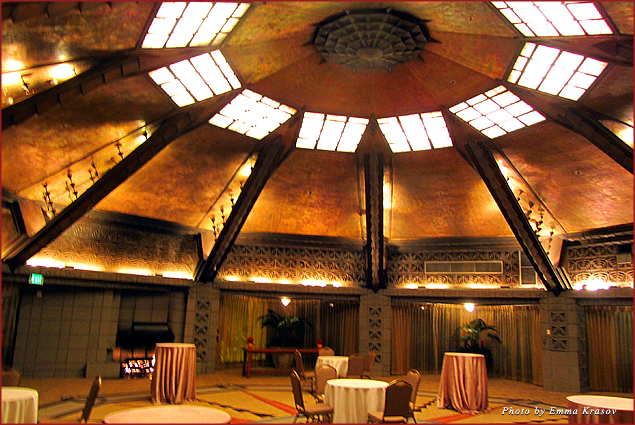 Wright’s influence is everywhere. Not only in the name of a gourmet restaurant on the premises which serves time-honored cuisine in the same impeccable style as it used to do almost a century ago – it’s in the utterly modern-at-the-time precast block design that makes the Biltmore’s outer walls look like brocade. Called “textile blocks,” the textured squares of concrete are woven together to create the light pattern of a prism, with consecutive waves radiating from a diamond-shaped center. Turned upside down, they mimic the fronds of the majestic palm trees around a swimming pool. The Biltmore signature relief acquires additional interplay of light and shadows under the blazing Arizona sun. 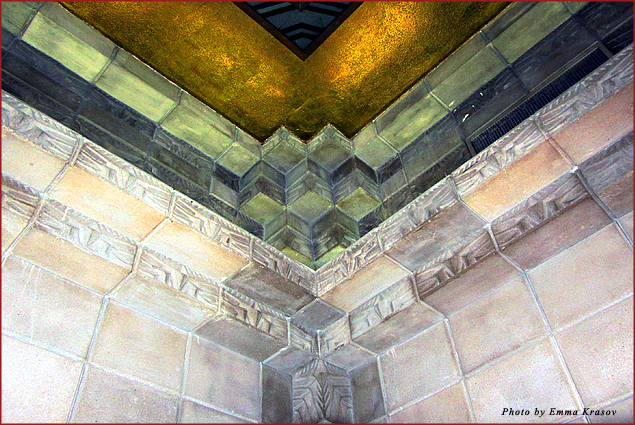 Wright’s design is in the gilded and patinated copper ceilings with wrought-iron light fixtures throughout the property, in spacious guest rooms with sharp angles, in a 1927 stained glass art piece, Saguaro Forms and Cactus Flowers, that graces the hotel lobby. 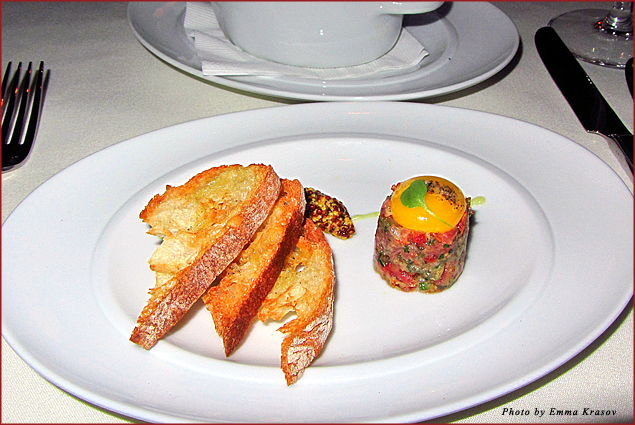 And speaking of the restaurant, Wright’s at the Biltmore is a place where fine resort dining reaches its shining heights. On the night I dined, executive sous chef Conor Favre and sous chef Jason Allen treated the patrons of Wright’s to an array of timeless classics, like beef tartar with quail egg yolk and trimmings; escargot cassoulet made with basil-fed snails; lobster bisque underneath puff pastry crust; Waldorf salad with crisp apples, and Beef Wellington with Hollandaise sauce. 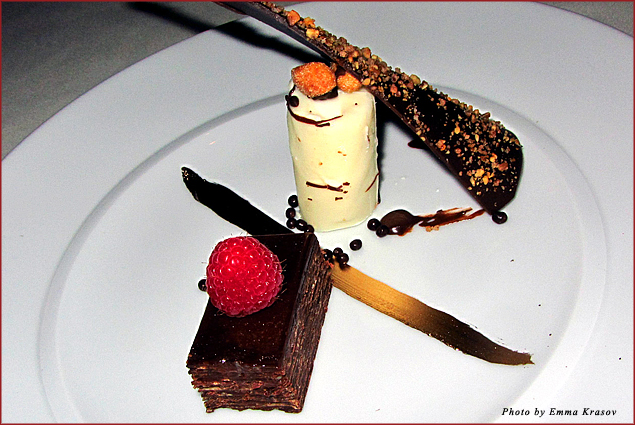 I won’t soon forget the nutty peanut butter crunch bar dessert with dark chocolate wafer and butterscotch gelato encrusted in white chocolate. Biltmore soufflé (chocolate, Grand Marnier, sauce Anglaise, or seasonal fruit) has been on the menu since 1929, and still holds its appeal.

The festival is themed entirely around Hollywood in celebration of the Biltmore’s connection to Tinseltown. Numerous celebrities have frequented the resort over the years, from Frank Sinatra, Liza Minnelli and Sammie Davis Jr., who gave impromptu concerts in the lobby, to Marilyn Monroe, who had her favorite swimming pool here, Irving Berlin, who penned ‘I’m Dreaming of a White Christmas” while sitting in the sun at the Catalina Pool, and more recently stars such as Tom Cruise and Bruce Springsteen.

This year, “A Night Under the Stars,” directed and choreographed by Louis Van Amstel (Dancing With The Stars), will feature performances by past and present participants of Dancing With The Stars, So You Think You Can Dance, and American Idol on Saturday, May 26. Click here for tickets.

Gary Sinise and the Lieutenant Dan Band will perform on Saturday, Sept. 1. Click here for tickets.

For a full schedule of activities and events at Hollywood and Wine, and to purchase tickets for the concerts and other entertainment, click here.

Special Room Rates: From Memorial Day through Labor Day weekend, the Arizona Biltmore will offer its lowest room rates of the year. A special summer offer, buy two nights, get one night free is available from May 24, 2012 – September 4, 2012. Rates start at $109 per night. Use group code “ZU” when booking online or by calling 1-800-950-0086.