An Inside Look at North America’s First Legoland Hotel 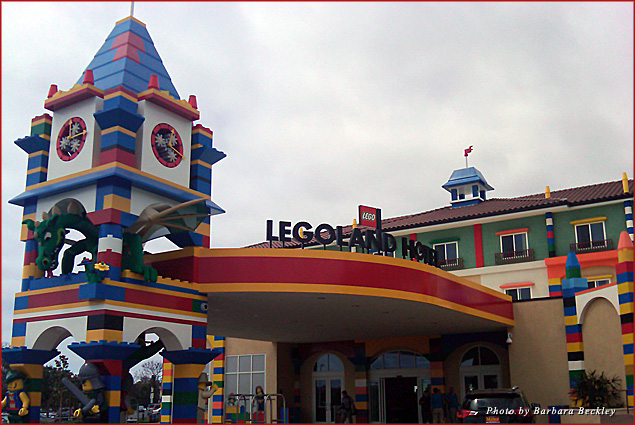 Dancing in the elevators. Hidden treasure in the rooms. Smoke-breathing dragons. And playful pirates, medieval knights, interactive games, and costumed characters … the nation’s first Legoland Hotel has fun for all—kids and adults. The new 250-room, three-story Legoland Hotel at Legoland California opened April 5, 2013, in Carlsbad, California, just steps from Legoland’s main entrance. Designed for children ages 2 to 12 and their families, I found plenty to enjoy—even as an adult without kids.

The smoke-breathing dragon (made of 400,000 Lego bricks) crouched atop the porte cochere brought a child-like smile to my face. And the smile continued throughout my stay. Interactive thrills, Lego brick characters, and wall murals envelop guests in a world based on Lego’s popular Kingdom, Adventure, and Pirate toys. Riding the elevators was a trip! (“Wait till you experience the elevators, and let me know what you think,” a fresh-faced front-desk crewmember said to me.) As the doors closed, a disco ball flashed and music blared—“YMCA,” “Staying Alive”—all the disco favorites. Of course I had to dance! A whoopee cushion under the carpet outside the elevators adds to the fun. 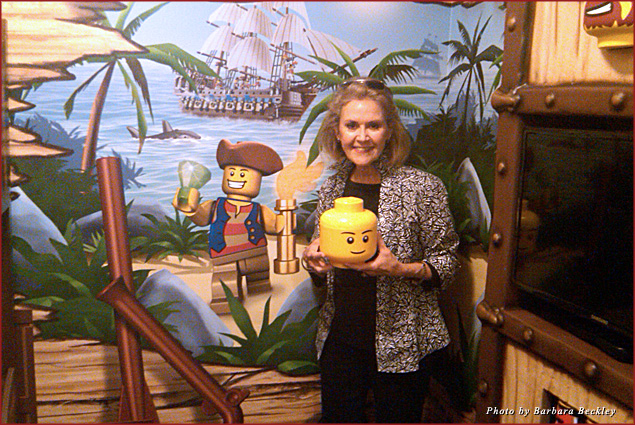 I wasn’t the only adult who climbed the ladder to the top bunk bed in my room, hotel general manager Frank Idris told me. Or laughed with glee at the fabulous, yellow, smiley-faced ice bucket. All the rooms are tricked-out with a kids’ alcove (“Adults Keep Out,” a sign says) featuring bunk beds and a pullout trundle bed to sleep up to three children. Additional kid perks include a lowered peephole in the door, a bathroom stool, and a built-in toilet training seat. Grandmothers take note: There was no magnifying make-up mirror in my room. (I have my own, so no worries.)

Kids get a map with clues to the combination of the safe in each room. Once they open it, the Lego treasure inside is theirs to keep. An adult queen or king bed and full-on décor round out the rooms, which come in three themes: Pirate, Kingdom, and Adventure. I chose a pirate room, and once I got into the adult bed the Lego brick skull and cross bones above looked me straight in the eye, reflected in the mirror across the room.

Legoland Hotel rooms come in two types: Themed and the more expensive Premium Themed, with additional Lego models and themed murals plastered across every inch of wall space. Junior and Family Suites are also available and include a third television and doors that adjoin to the next room. 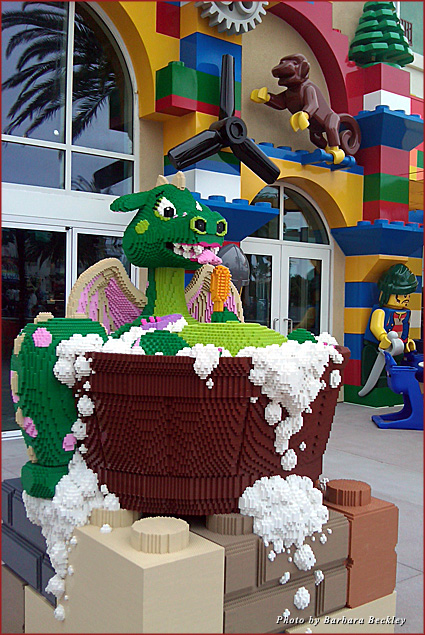 The castle play area off the lobby is the center of activity. Kids—and adults—create Lego figures from the Lego-filled moat, enter the Lego brick castle guarded by a Lego brick ogre, and play on the pirate ship. Nightly entertainment on the castle stage preps young guests for bedtime. I was impressed at how well the hotel pairs adult relaxation with kid fun. The light and airy Skyline Bar off the lobby serves a good range of wines and cocktails. Glass doors open to the poolside patio. The adjacent Skyline Café serves light fare and beverages all day to adults and kids.

Bricks Family Restaurant serves buffet breakfast and dinner in an equally colorful setting, with Lego brick figures and live costumed characters inside and outside on the patio. The child-height buffet station is a hit with the younger set. Huge grilled mushrooms, cooked-to-order omelets, and smoked salmon impressed me at breakfast; tasty baked potatoes, a carving station, and Mexican and Italian dishes are among the offerings at dinner. Healthy and flavorful is the restaurant mantra. “We source our food locally from within 20 miles,” Idris said.

Another perk: Hotel guests have exclusive, early morning access to the theme park and the Legoland Sea Life Aquarium. Sharks, rays, seahorses, and the largest crabs on Earth are among its plentiful marine life. The aquarium is way larger than I expected. It goes on and on, with a walk-through underwater tunnel, touch tanks, and exhibits with plastic bubble domes that kids can crawl into while parents snap photos of their offspring inside with the fishies. 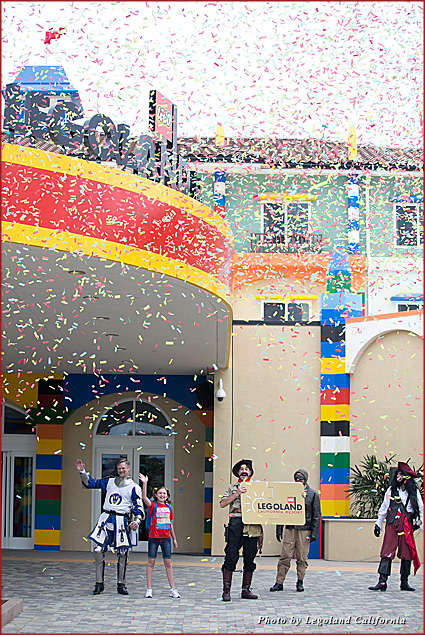