An Afternoon in the Square of Miracles 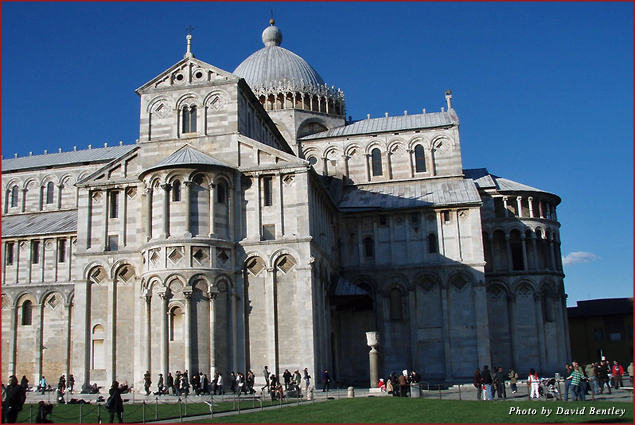 Pisa’s Piazza del Duomo is also often referred to as the Piazza dei Miracoli, which translates in English as “Square of Miracles,” and when you first enter into this UNESCO World Heritage site you can see why this name, first penned by Italian poet Gabriele d’Annunzio, is so apt.

The pristine grounds of this beautiful square are home to four impressive structures: the bell tower, the duomo, the baptistery, and the camposanto monumentale.

Although a relatively compact area, I would still suggest spending at least a half-day here to really drink in all the history and grandeur.

The Bell Tower When you first walk through the immense archway into the square, your eyes are instantly and inevitably drawn to this tower, and honestly no photo or guide-book description can really prepare for you just how much this tower really does lean.

Construction of this seven-tier tower began in 1173. Five years into the build, poor foundations, which were only 3 meters (about 10 feet) deep, started to see the building sink on one side. It was then left alone with no further works taking place on the structure for a further 100 years(!) whilst the ground was given time to adjust to the weight. The tower as it looks today was finally finished in 1319, with its bell chamber at the top added in 1372. At its greatest angle, the tower used to slant at around 5.5 degrees, however this was recently reduced back to around 4 degrees.

You could spend quite a long time getting that picture of propping up (or pushing over) the tower, which is a lot of fun. However, I personally got more enjoyment out of taking a step back and watching others try to get their perfect photo. It makes the hundreds of individuals attempting it look as though they are performing some odd form of Tai Chi.

Whilst here, I did fall foul of the extremely long waiting times to climb the bell tower, but one could argue that there probably aren’t many better places in the world to be stuck for a few hours. It seems I got lucky buying my ticket on the day though, as the helpful ticket office agent informed me that they often sell out early, for the entire day, leaving many visitors disappointed.

Only 20 people can climb the tower at a time so advance booking online is strongly advised. You can visit the official ticket store online. Tickets must be purchased a minimum of 16 days in advance of your visit.

Whilst I waited for my time slot to climb the tower (in four hours time) I embarked on my own mini adventure, taking in everything that this square had to offer…

This cathedral is stunning. It sits just in front of the leaning bell tower with an exterior made from grey-white marble and a set of huge bronze doors. Inside, I was amazed by its simple yet exquisite architecture with more beautiful marble and a gilded celling.

The main attraction inside the duomo is Giovanni Pisano’s hugely detailed pulpit, which took eight years to carve and is widely regarded as one of the best remaining examples of medieval sculpture in the world. The pulpit depicts various scenes from the New Testament, set in yet more marble. 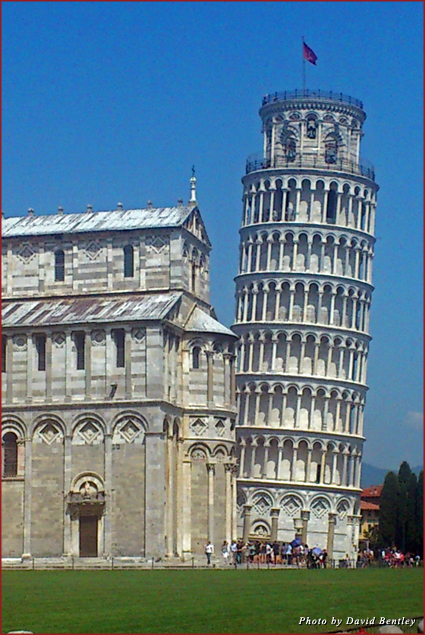 The cathedral also has an interesting conflict of style within its walls. It’s obviously packed with many Christian references and artifacts but also oozes with Arabic charm, largely down to the fact that some of the supporting columns were taken from the Mosque of Palermo in 1063.

The duomo, almost as if it was jealous of its famous bell tower, also slightly tilts.

After a short walk from the duomo you will find yourself at the baptistery. Dedicated to St. John the Baptist, this is the biggest baptistery in Italy. I probably spent the least time of all in this building, largely due to its handsome features outside, which were not reflected inside with its very plain walls. 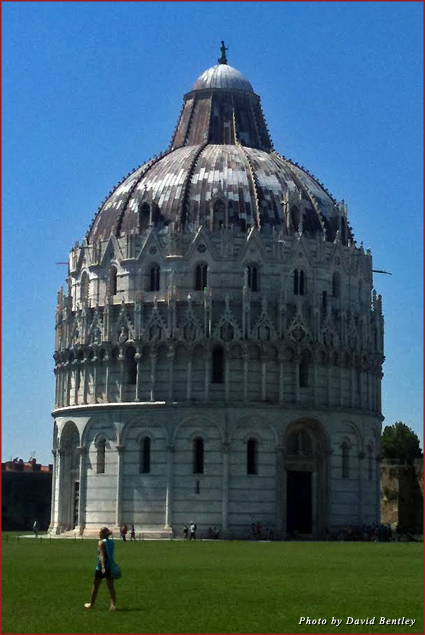 The baptistery does contain another beautifully carved pulpit, this time by Nicola Pisano (Giovanni’s father) and centers around a large octagonal font with a statue of St. John the Baptist in the middle.

This huge, walled cemetery was my last stop before re-visiting the leaning tower for my climb to the top.

The camposanto monumentale, was built using soil brought back by the archbishop of Pisa in the 12th century from Golgotha, a site in Jerusalem, where the crucifixion of Jesus took place. It is claimed that bodies buried in the holy ground here will rot in just 24 hours. 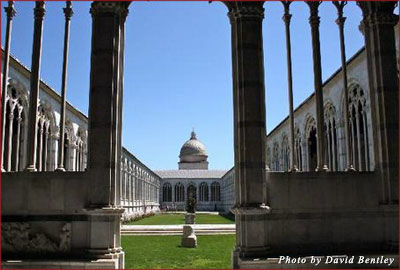 The cemetery is rectangular structure, with an immaculate lawn garden in the center complimented by rose bushes. Inside, it is covered in vivid and extremely detailed murals. There were many more of these murals in addition to the ones that can be seen today, however a lot of them suffered substantial damage in 1944 from World War II bombings. Extensive work is still being carried out to this day to restore some of these murals.

The environment here is very somber and peaceful, and it was great to have some reflective thought amongst all that history.

(Back to) the Bell Tower

After my time in the other attractions of the square, I headed back to the back of the bell tower to begin my climb to its summit.

You have to leave any handbags, backpacks, and other stuff in the dedicated bag-drop area, which is looked after by a security guard. There isn’t a charge for this, and they let you keep your camera on you.

The 10 minute climb up 300 spiralling steps is challenging and very hot. But it really is worth the effort for the amazing view of the Pisa skyline, neighboring duomo (from a much better angle than from the ground), and sweeping lawns of the square with the swarm of tourists below doing their poses.