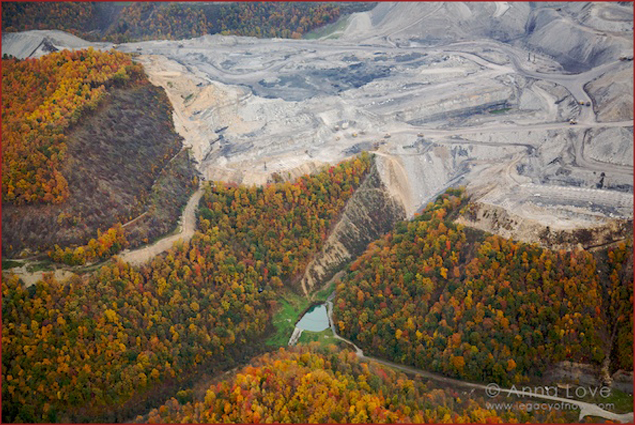 I was inspired to go to West Virginia as a curious human being who cares about our human right to live on a healthy planet. I’d gone to the opening of a documentary called Burning the Future at the Sundance Kabuki Theater in San Francisco. The entire film-making team was there as well as Maria Gunnoe, 2009 winner of the prestigious Goldman Environmental Prize. The movie was about mountain top removal in West Virginia. 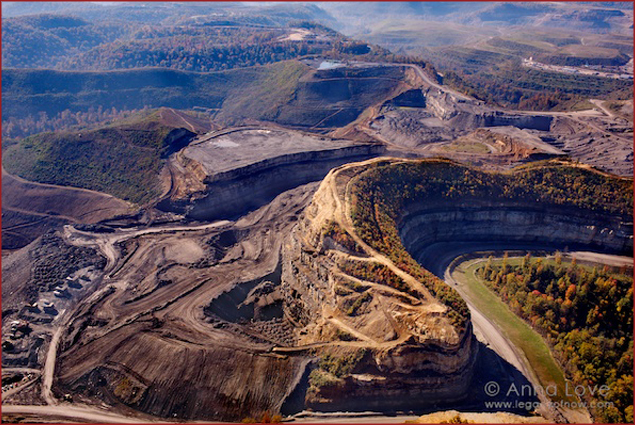 I wasn’t an activist or a humanitarian photojournalist. I’ve been photographing posh weddings in the wine country for the last 8 years, enjoying eating organic food and drinking wheat grass in San Francisco. So it’s a bit unusual that I would choose a trip to West Virginia to see mountains being blown up as a vacation. What inspired me was a sense of urgency inside, a feeling that time is running out for all of us if we each don’t do what we can to make positive choices for the planet. And what I could do was take pictures and share them.

I walked off the airplane keeping my eyes open for someone who might be Paul Corbit Brown. He had kindly offered to host me and be my West Virginia guide. I was surprised by Paul’s hospitality and graciousness. I felt a little self-conscious, being a Northern California girl on some do-gooder exploratory journey. I fit the cliché to a T, Jewish girl from NYC, living in San Francisco, practicing yoga, wide-eyed and wanting to make the world a better place. We walked to Paul’s car. I asked him if he minded if I smoked and he asked me if I liked sushi. Our responses sealed that we would get along famously. It’s a good thing I’d gotten off my vegetarian non-smoking kick. I could hear Michael Jackson, who had just died a few days prior, singing in the background, “Girl it’s your thing. Do what you wanna do now.” 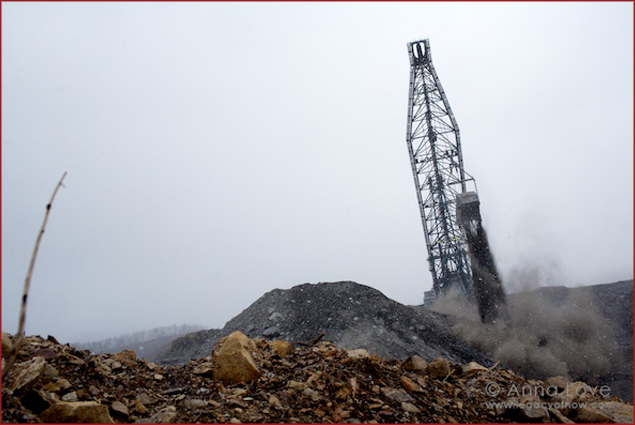 While I was self-conscious about being an outsider, no one I met was. West Virginians are used to outsiders, and overall, I found people to be warm, welcoming, hospitable and gracious. And the irony of all ironies, they kept asking me if I was a vegetarian. I could have had more vegetarian meals in West Virginia than San Francisco – go figure! Wondering what hell looked like, I was quickly struck by the natural beauty around me. Lush, winding, mountain roads led the way. And why stop the cliché; I could almost hear John Denver whispering, “take me home, mountain mama” in my ear. As Paul drives, he starts making hillbilly jokes and has me in stitches laughing. And after a drive down a gravel road, we arrive at a porch with two rocking chairs. Sitting on the porch, I felt immediately slowed down. Hollers, really a “hollow: a valley between mountains,” have their own sound. It’s as if their being cradled by mountains and trees creates a softer silence. There’s peacefulness in the air, and as I look around, I notice that this is a place where leaves takes the time to fall and rest in unexpected places. 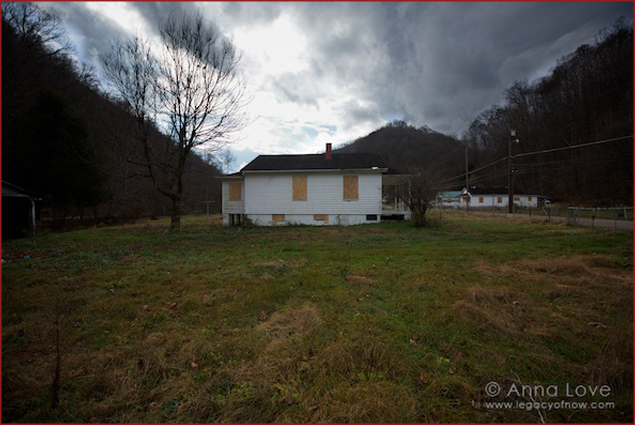 I’ve been hanging with Paul sitting on a rocking chair watching him smoke his pipe, looking out at the trees. Listening to Paul’s stories about his uniquely beautiful life, of which growing up and living in West Virginia is an essential part. He takes me on a meandering walk up the holler, showing me the many native trees and medicinal plants. His grandparents used to farm the holler hillside, and their tombstones are nearby – true for many West Virginians.

I couldn’t have imagined the beauty. The Appalachian Mountains are home to 255 birds, 78 mammals, 58 reptiles, 76 amphibians, and over 200 fish species. The forests of Appalachia are famous for luxuriant diversity. In a single square meter, some locations have a dozen species of spring wildflowers. And you might find an Appalachian monkeyface. The New River, one of the world’s oldest rivers, is one of few in the world that flows from south to north.  It provides a habitat for many endangered and threatened species of salamanders and mussels. With headwaters in North Carolina, the New churns through Southwest Virginia and halfway across West Virginia where it joins the Gauley to become the Kanawha River.  The aquatic diversity of the area surpasses all of Northern Europe’s. It’s beautiful waters nourish much of the Eastern seaboard. 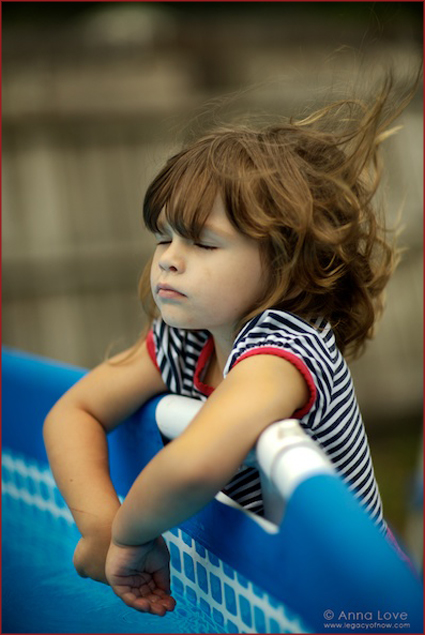 Unfortunately, these waters are at risk. And this is where hell comes in and another cliché, the coal industry. Coal mining was never environmentally friendly. Now, with the technological creation of a humungous piece of machinery called a dragline and the practice of mountain top removal, it’s devastating. Mountain top removal, in a nutshell, is when the top of a mountain is blown off through a series of explosions, the coal under the surface of a mountain scooped out, and the rock and soil that covered the coal is pushed into the surrounding valleys burying the headwaters of streams and rivers. While this is an efficient way to extract coal, it poses some environmental problems. 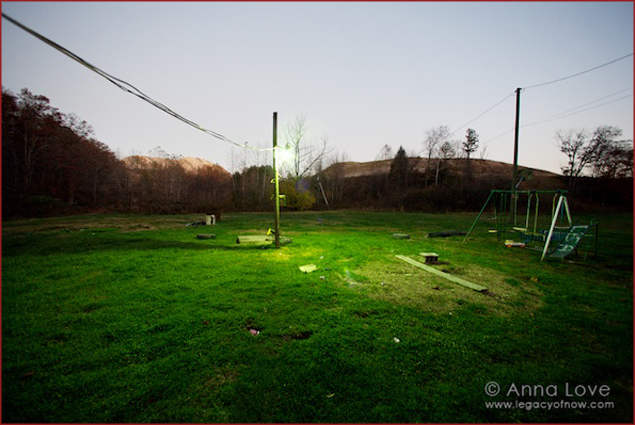 First of all, blowing up a mountaintop releases dusts that are full of heavy metals and silica. This dust enters the valleys, the rivers and covers people’s homes. Scientists say it’s toxic, polluting, and cancer-causing. Secondly, the loss of topsoil and tree roots systems increases the threat of flooding the valleys and communities below. The coal industry says it’s safe, and claims that mountain top removal improves the landscape through something called reclamation. Reclamation is a restoring process of the mountaintop, where trees are replanted and animals reintroduced. I’m no scientist, just a photographer. In my eyes, having experienced the soft, undulating roll of the Appalachian Mountains, reclamation is a visual blight and an insult to aesthetic intelligence. Fortunately for tourists, it’s rarely visible from the roads – that’s part of West Virginia law.

Although I’d been experiencing slices of heaven, beautiful landscapes, local hospitality, a float downriver from a swimming hole watched over by gentle waterfalls, a locally grown organic meal at the Bluegrass Café and of course some spontaneous fiddle playing, I’d also finally seen Hell. There is a place in West Virginia called the Gates of Hell. It is the gate that separates Larry Gibson’s property on Kayford Mountain from a mountain top removal site.  Larry Gibson’s family has lived on or near Kayford Mountain since the late 1700’s. More than 300 relatives are buried in the cemetery on the mountain. Kayford Mountain used to be as lush as the surrounding vistas, its people able to survive on its natural resources. Now Kayford Mountain is largely a devastated and toxic wasteland, excreting sickly colored water ranging from milky white to bright orange in color. As I stood at the edge of the Gates of Hell, I physically felt the importance of saving our mountains. 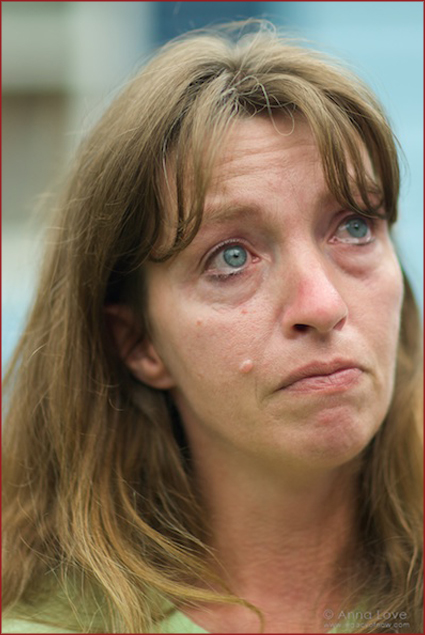 One of my most memorable interviews was with Carol Gibson. She grew up on Kayford Mountain, a focal point of the controversy between those for and against Mountain Top Removal. She sat on the porch of her wooden cabin, which hasn’t changed in decades. Kerosene lamps light the inside and the old O’Keefe and Merritt stove runs on propane. Trees surround the quaint, little home. The rustic, romantic aura of the past is only disturbed by the surprising sounds of industry and regular explosions. Carol and Larry, now in their sixties and married for five years, grew up on Kayford Mountain. They blush and giggle when around one another like teenage lovebirds. Sitting on a rocking bench, Carol told me a story of how a little blue butterfly saved San Bruno Mountain from development in the Bay Area. In her enchanting West Virginia accent and soft voice, looking out longingly into the distance, she said, “I sure wish they’d find a little blue butterfly that would save our mountain.” In researching the biodiversity of West Virginia Appalachia, I discovered that eco-scientists are on the lookout for a little white butterfly on the verge of extinction and asking for help in finding it in its habitat. 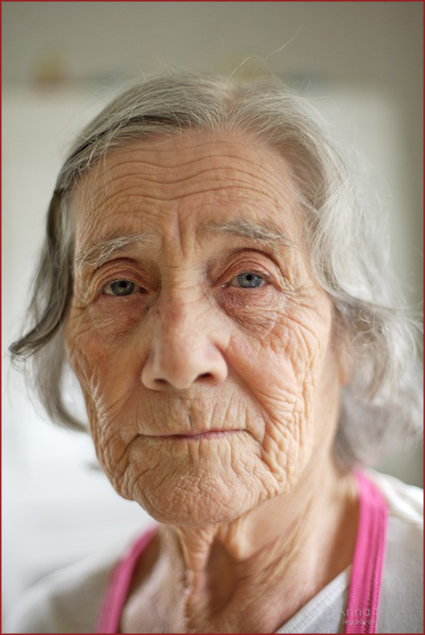 Environmentally responsible tourists can be the little white butterflies that help to preserve Appalachia’s precious and beautiful landscapes. Without any connection to my trip, my cousin, an eco-scientist who’s just spent the last year doing research at Lake Baikal, which holds 20% of the earth’s fresh surface water and is also now polluted by industry, is planning her family vacation to West Virginia, not as a scientist, rather to enjoy the abundant rafting and hiking. I encourage you to spend some of your vacation dollars in West Virginia to enjoy and save its lush rivers and mountains. On a side note, Paul and I have both quit smoking, believing that the health of our bodies is as vital as the health of our planet.