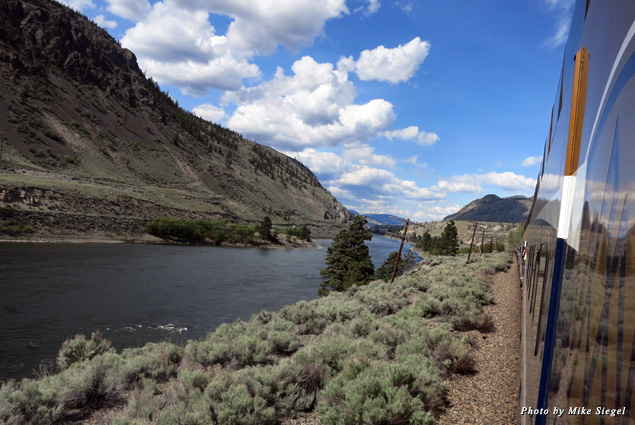 The joys of train travel seem to be lost on most North Americans. Our devotion to the automobile and airplane has robbed most of us of the pleasures of watching the scenery roll by unencumbered by traffic snarls or flight delays. There’s something to be said for kickin’ it old school once in a while, and for a throwback travel experience, it’s hard to beat a trip on Canada’s Rocky Mountaineer.

Celebrating its 25th anniversary this year, Rocky Mountaineer treated the media in April to the inaugural ride of the season on its original route from Vancouver, British Columbia, to Banff, Alberta. The two-day trip takes passengers through some of the most stunning scenery in North America, a reason it has won the World Travel Award as “World’s Leading Travel Experience by Train” multiple times. Since the train ride only lasts for two days, it’s a wise idea to bookend the trip with extra time spent in the cities at either end of the tracks.

It would be behoove any Rocky Mountaineer passenger to spend at least a day or two in Vancouver—a world-class city with excellent restaurants, shopping, museums, and a diverse population. It’s clean, friendly (it is Canada after all), and perfect for nature lovers and athletes, as mountains surround it to the east and the Pacific Ocean surrounds it to the west.

Since I had visited downtown Vancouver a number of times, I decided to take the free day before the train to experience the surrounding areas. My first stop was Sewell’s Marina in Horseshoe Bay for a Sea Safari zodiac boat tour. Luck was literally shining on us as we were blessed with an abnormally cloud-free sunny spring day (rain is always a possibility in the Pacific Northwest, no matter what time of year), making it a perfect time to be out on the water. 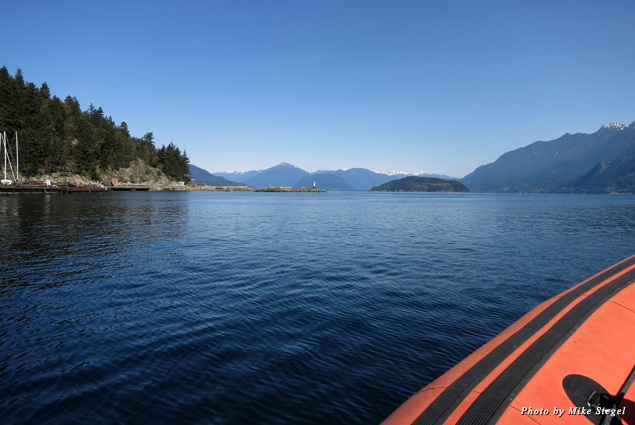 The guides pointed out the local flora and fauna of the bay and its many islands during the 45-minute trip, and we spotted plenty of seals and birds of all kinds, including bald eagles. Naturally, we were all on the lookout for whales, but sadly none made an appearance. Still, it was a pleasant way to spend the morning.

Next it was off to lunch at the Summit Lodge atop the new Sea-to-Sky Gondola in Squamish, British Columbia. A peaceful ride up is rewarded with beautiful views of the mountain range and bay below. If guests want to make a full day of it, there are numerous hiking trails on the mountain, and it’s also a popular rock climbing area. In winter, snowshoeing and back-country skiing are options for visitors. 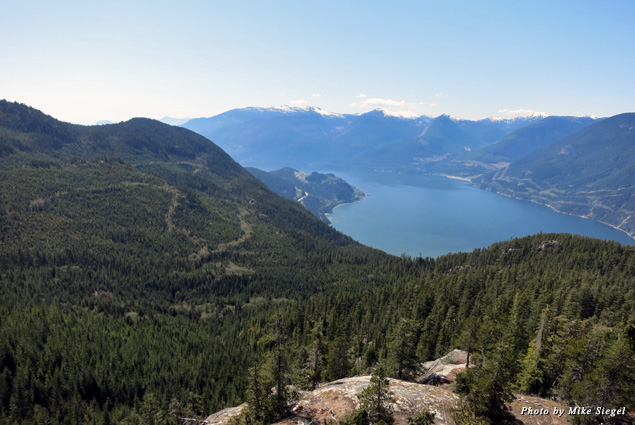 As the afternoon closed, we headed back to town and our digs at the classic Fairmont Hotel Vancouver situated in the heart of the city and a good base location for walking to key shopping areas and museums.

Dinner was a fantastic meal at one of Vancouver’s top restaurants, the modern Italian eatery CinCin. The centerpiece of the kitchen is a massive two-meter stainless steel grill. Fittingly, CinCin is recognized for its meat and fish, but the homemade pastas are worth trying as well. Add to that an extensive wine list, and CinCin was a fine host for a welcome dinner.

The next day began at 6:30 a.m. in the hotel lobby, where Rocky Mountaineer staff checked our luggage for a 7:30 train departure. A quick bus ride and we were at the station, being feted by what appeared to be every Rocky Mountaineer employee and even a few Scottish bagpipers thrown into the mix. 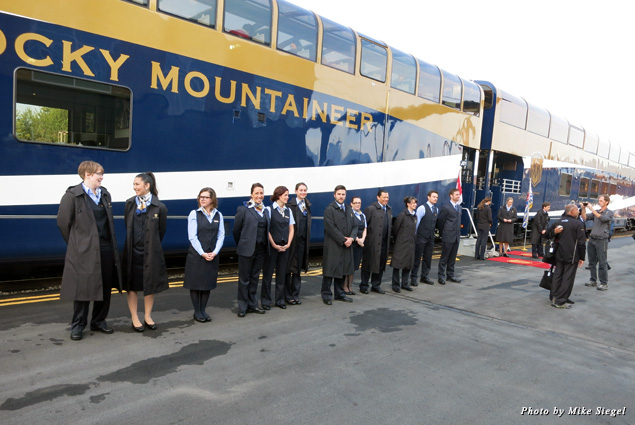 The train features two classes of service: SilverLeaf and GoldLeaf. Both classes include hotel transportation, lodging for one night in the midway town of Kamloops, British Columbia, two lunches, two breakfasts, snacks, and best of all, complimentary drinks. Yes, you heard that right—the bar is always open!

The GoldLeaf class also features a hotel upgrade, an exclusive dining car with a more extensive menu, and a two-level, glass-domed coach with full-length windows.

In this writer’s opinion, the GoldLeaf class is the way to go. This is not a metro commuter train. The Rocky Mountaineer is designed to be a special traveling experience. If you’re going to do it, do it right. Kick in the extra bucks and go all the way. A bullet train, this isn’t. The Rocky Mountaineer takes its time, allowing for enhanced scenery intake as well as the occasional pause to allow right of way to a freight train.

The Rocky Mountaineer offers five separate routes. The newest one, the Coastal Passage, covers the relatively short trip between Vancouver and Seattle. I was taking the First Passage to the West route, retracing the historic Canadian Pacific Railway that united the country by connecting British Columbia to the rest of Canada back in the 1800s. 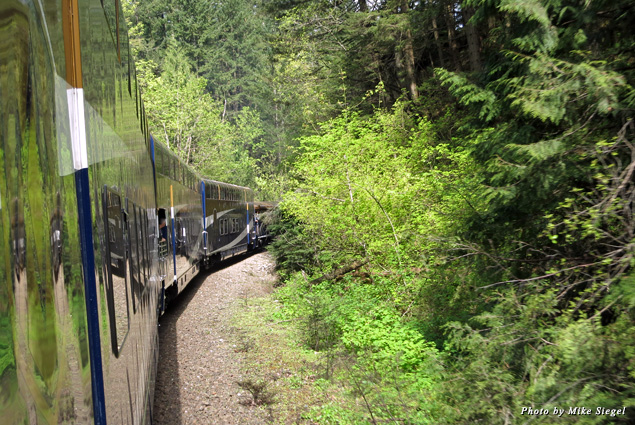 That being said, the bulk of the show-stopping scenery occurred mostly on the second day, when the train made the climb up the Rocky Mountains. Day 1 was a study in contrasts, as we made our way from Vancouver and the suburbs 285 miles east to Kamloops. Lush coastal forest and mountains turn to high desert landscape by the end of the day, and we could feel the temperature rise 10 degrees or more during periodic trips to the between-car viewing platforms.

The tracks mostly run alongside the Fraser River and its many canyons and dams. Highlights include sights with great names such as Avalanche Alley, Jackass Mountain, Skuzzy Creek, Jaws of Death Gorge, and the most popular attraction, Hell’s Gate—the narrowest part of the Fraser River, where 200 gallons of water rush through every minute.

The amazingly friendly attendants are there every step of the way to point out the attractions and answer any questions. In a way, they are almost too helpful, as I could have done with a little less talking on the microphone and a little more quiet time en route, but that’s a personal preference. There are written guides with maps at each seat that tell all you need to know about the sites, the routes, the history, etc. There were times I put on the ear buds, listened to music, and followed along on the page. I even made a special train-themed playlist. Oh, sweet iTunes.

The Rocky Mountaineer pulled into Kamloops at around 5 p.m. and we boarded buses to our hotel, where our luggage waited in our rooms. At 85,000 residents, Kamloops is no Vancouver. However, it knows how to accommodate the thousands of visitors who pass through every year by having a few choice restaurants. 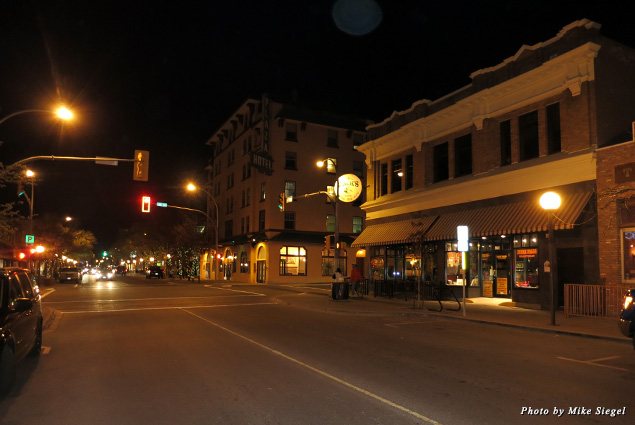 A good place to start the evening was the Noble Pig Brewhouse, Kamloops’ first and only microbrewery. Craft beer, a full menu, and maybe the best fried pickles I’d ever had all made for a warm welcome to the town. I’m not kidding about the pickles; several other writers and I reminisced about them a few days later.

From there it was on to Terra Restaurant for dinner. A recent addition (2012) to the local scene, Terra specializes in local farm-to-table fare and regional wines. Another option is the Fireside Steakhouse at the Plaza Hotel, where we ended the day with dessert and a nightcap. Some travelers made their way to the small local casino before turning in. I preferred bed and a food coma. All in all, it was a fine first day on the Rocky Mountaineer.

On Day 2 we boarded the train at 7:30 a.m. once again, but soon the hot coffee combined with the stunning scenery was enough to shake off any grogginess. As the Rocky Mountaineer made the climb toward the Rockies, the landscape began to change from ranches to foothills, then up past glaciers and aquamarine rivers. Mountains grew taller and taller until snow capped the peaks. 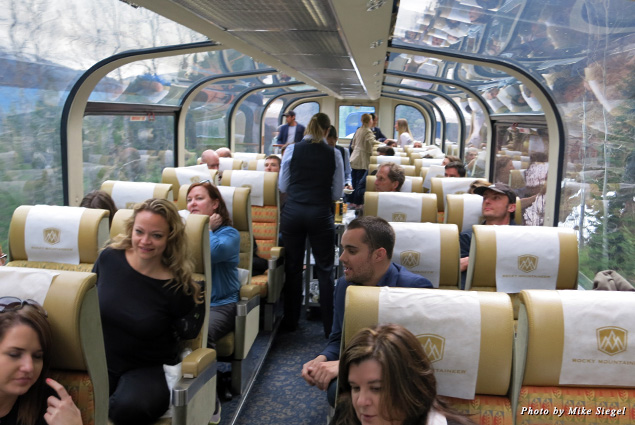 At lunch, a fellow passenger spotted a bear out the window, and I thought the train was going to tip over when nearly everyone rushed to that side for a look. Truth be told, we’d been dying to see wildlife. The sight of a lone black bear lazily watching the train go by was enough to make grown adults shriek in excitement.

As the day went on, we did spot several groups of elk, but no more bears. I was hoping for a moose myself, but I was shut out.

By afternoon we had crossed over the Continental Divide and into Banff National Park. A UNESCO World Heritage Site, Banff is an outdoor lover’s paradise. Summer is the peak season in Banff for its fishing, golf, hiking, camping, etc., while winter brings out the skiers and snowboarders.

As the train huffed past Lake Louise, known for its unique turquoise waters (unfortunately still iced over in April), we pulled into the picturesque Banff train station and said goodbye to the Rocky Mountaineer train and its dedicated and friendly staff once and for all. It’s hard to imagine a better way to reach this part of the country.

At first glance, the town of Banff could pass for any typical mountain town, but since it lies within a national park, large-scale development is strictly regulated. Residents can own their homes but lease the land from the state. This helps curb the condo and McMansion sprawl that blights many US resort towns and helps maintain a quainter feel.

It also helps keep crowds from clogging the ski slopes. During my day off in Banff, I went skiing at Sunshine Village Ski Resort, a quick 15- to 20-minute ride from the center of town. Granted, we were skiing on a weekday in mid-April, but I’ve never before had a day on the slopes without ever having to wait for a chairlift.

Access to Sunshine Village is easy with daily shuttle buses providing service from the town and several resorts. This worked out perfectly for me, since the shuttle makes a stop at my hotel, the infamous “Castle in the Rockies,” the Fairmont Banff Springs Hotel. If it’s in your budget range, I strongly recommend a stay there. 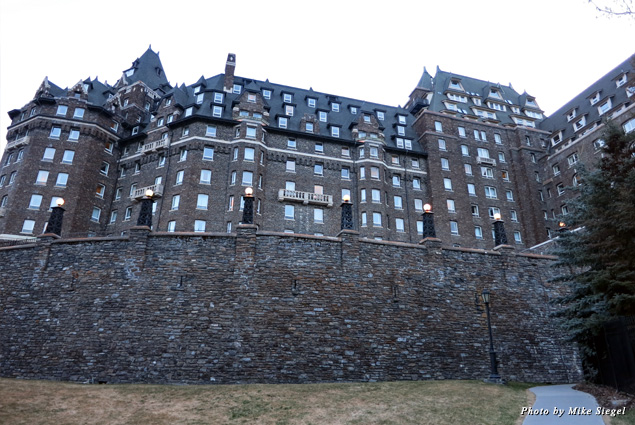 At 125 years old and boasting nearly 800 guest rooms, a full spa, a championship golf course, a conference center, and a dozen bars and restaurants, the luxury Banff Springs is as legendary as it is huge. Movie stars and world leaders have all been guests, and even if you stay elsewhere, it’s worth a visit to stroll the hallways and have a drink or a meal.

I had a terrific dinner at the Bavarian cottage-style Waldhaus Restaurant on the hotel grounds. The Waldhaus specializes in fondue and has an extensive wine list, and of course, the beer selection was befitting a German restaurant. It was perfect mountain fare.

I was more than willing to extend my stay in Banff, but schedules must be kept, and on my final morning I hopped the airport bus for the roughly two-hour ride to Calgary. I rolled away from Banff and the Rocky Mountaineer train and on to more modern transportation. The smiling staff and open bar soon was replaced by security checkpoints and flight delays. One thing is for certain: Flying over the Rocky Mountains pales in comparison to riding slowly through them.

After all, when was the last time you spotted a bear through an airplane window?