Adventures on the Romantische Strasse 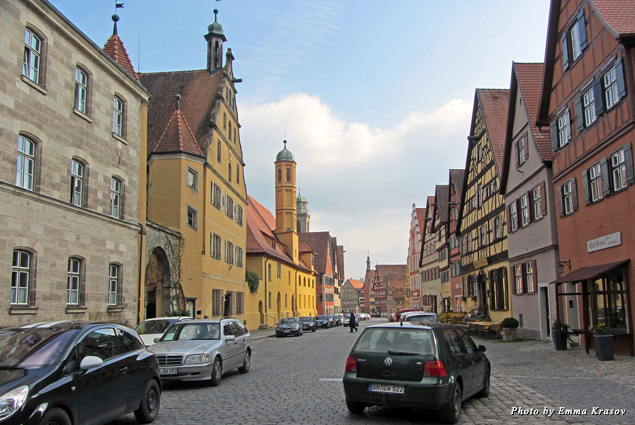 There are dozens of historical monuments, charming little towns, cozy hotels, and long-standing restaurants along the Romantische Strasse that runs for 400 kilometers in the South of Germany. Stretched between Würzburg on the Main River and Füssen in the foothills of the Alps, it’s impossible to cover in one short trip, so every traveler has his or her own adventures on the Romantic Road.

Mine started shortly after I arrived in Würzburg, from where the luxurious buses or hired cars take tourists down the road that crosses five rivers and seven distinctly different regions, mostly in Bavaria. 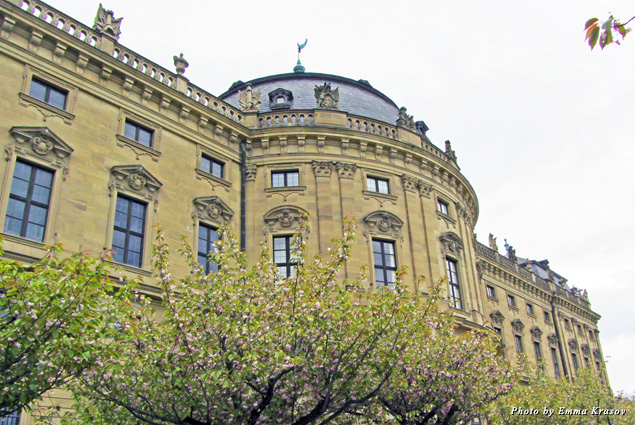 Smitten by the grandeur of the baroque Residenz Würzburg, I made a misstep, twisted my ankle, and fell on my precious digital camera.

My hired driver, Mr. Köksal Balikci, and a couple of passersby rushed to my rescue. They helped me steady up and started saying something encouraging in German, smiling and nodding to express their sympathy and assure me that everything will be just fine.

I, too, was smiling and nodding, while thinking my Romantic Road adventure threatened to end before it has begun. An attempt to step on my twisted foot sent a jolt of sharp pain through my leg and brought tears to my eyes. Mentally, I was fast-considering possible solutions: drop everything and fly back home to my loving husband, rush to a doctor and risk being grounded with some kind of a cast or crutches, continue my trip sitting in Mr. Balikci’s car and observing everything through the window, or instantly become a doctor and heal myself.

I declined my driver’s kind offer to take me to a hospital and asked instead to stop at the nearest pharmacy. Equipped with an ice pack and a bandage, I made myself comfortable on the back seat, tightly wrapped my traitorous ankle, and covered it with ice.

During our first stop in hard-to-pronounce Tauberbischofsheim, with its Neo-Gothic town hall and medieval half-timbered houses, and later in Lauda-Königshofen, surrounded by vineyards and bright-yellow rapeseed fields, I discovered another unfortunate consequence of my fall. My camera shutter was severely damaged and refused to open or close unless I helped it with my own fingers. I decided to continue taking pictures “manually,” hoping at least some of them would be good enough to look at. 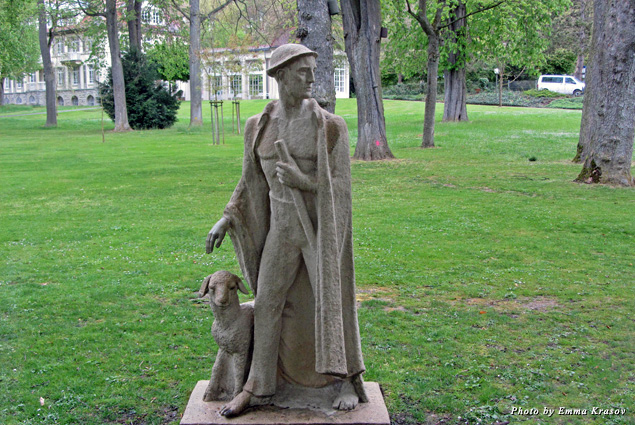 At Bad Mergentheim, first mentioned in historical records in 1058, where we arrived for an overnight, a tour guide was already waiting for me at the Best Western Premier Parkhotel lobby. She held an umbrella, since it was raining, and offered to take me to the Castle of the Teutonic Order, to Altes Rathaus (built in 1564), and to the spa garden with mineral springs and a drinking facility.

My ankle was silently wailing from pain, but my curiosity took over, and we started our walking tour slowly but surely. I learned not only about the historical past of the town but also about its current popularity with medical tourists from all over Europe. A modern spa resort, Bad Mergentheim is known for its four springs, which according to a legend were discovered by a local shepherd who noticed his sheep loved to drink sulphate water and felt much better afterwards.

Back in my hotel room, I took the bandage off my ankle and observed the damage. My entire foot was swollen and blue. It was painful to the touch and if I moved it ever so slightly. I took a couple of painkillers and placed my foot atop a folded blanket and a rolled up bath towel.

The next morning at the hotel breakfast, I yet again declined my kind driver’s offer to take me to a doctor and braced myself for a day of wonderful sightseeing and periodical painkiller intakes.

The town of Weikersheim is known for its stunning Renaissance castle with a baroque park. The enormous 35-meter-long Knights’ Hall of the castle is solely dedicated to hunting scenes and decorated with paintings and three-dimensional representations of wild animals. At the well-preserved park, a sculptural group of gnomes greets a visitor with their curiously realistic facial expressions, while Roman gods and goddesses boast distinctly Teutonic chins.

A carved wooden altar dedicated to the Virgin Mary in Herrgottskirche is a main attraction of Creglingen. It was created from 1505 to 1510 by a brilliant late-Gothic artist, Tilman Riemenschneider. Another specialty of the town is the Thimble Museum, with an extensive collection of sewing tools turned into art pieces. 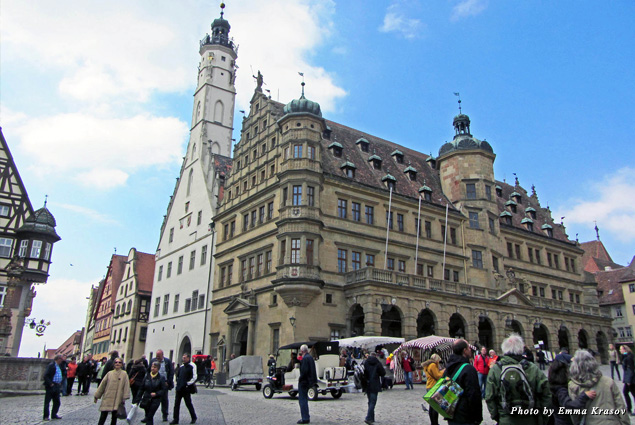 We made a longer stop at Rothenburg ob der Tauber, with its completely preserved 14th century town wall and its impressive half-Gothic (1250-1400) and half-Renaissance (1572-78) town hall. Overcoming the nagging pain in my ankle and driven by an insatiable curiosity I thoroughly researched the Historical Vaults and Imperial City Dungeon, with an exhibition about the Thirty Years War (1618-1648); the German Christmas Museum, with tree ornaments of all time periods; and the Medieval Crime Museum, which displays the tools of punishment far exceeding any imaginable crimes.

At Schillingsfürst, the imposing baroque castle was closed for the public, so we just looked at it from a terrace of a hotel coffee shop Die Post, where the hospitable owner, Fritz Leiblein, treated us to a homemade peach pie and a story about the last representatives of the 1000-year-old family of Hohenlohe-Schillingsfürst—a mother and a daughter who still live in the castle and sometimes make appearances in his café.

On our next stop in Dinkelsbühl, after photographing the tower of St. George’s—a stunning late-Gothic church built in 1499 by Nikolaus Essler—and the picturesque Weinmarkt with multi-colored half-timbered houses, I dropped on the back seat of the car like a sack of potatoes, wincing from pain.

Mr. Balikci told me that before we continue our route, he had to stop at the town’s tourism bureau. Five minutes later, he emerged from the office holding a nice polished-wood alpenstock with a sharp metal tip. “Here,” he said, “a souvenir for you.”

That was indeed a souvenir! By the bent handle of the walking stick there was a metal label with an engraved dedication to the 1000th anniversary of the town. I thanked my considerate driver and decided since we were already halfway down the Romantic Road and I was so well equipped by now I would definitely make it.

We made a short stop in Nördlingen, with its five gates and 12 towers of the original circular town wall, looked at “Daniel”—the 90-meter bell tower built from 1427 to 1505 from the porous local stone—and marveled at the 13th century Rathaus with the external flight of stairs in Renaissance style.

By Donauwörth I walked, piercing the ground with my alpenstock, at the confluence of two rivers—Wörnitz and Donau—and then took some pictures of the central street, Reichsstrasse, with its majestic patrician houses. 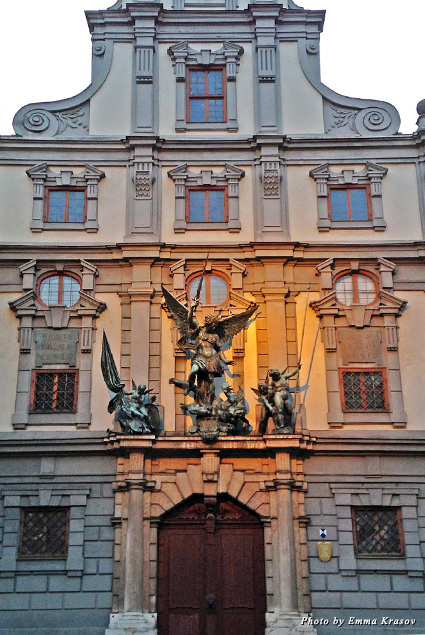 When we finally arrived in Augsburg for an overnight stay (much later than planned), my new city guide was upset because of the lack of time for a full-blown tour. I had to reassure her that with my impaired walking ability our tour was to be curtailed anyway. Nevertheless, I followed her to the splendid Golden Hall of the 1620 Rathaus and to the 1607 Zeughaus with a stunning St. Michael’s group over the gate—fascinated by the rich history of the city founded 2,000 years ago by the Roman Emperor Augustus.

We walked from the splendid Maximilianstrasse to Fuggerei, the world’s oldest social settlement built in 1516 by the notorious Jakob Fugger Reiche (“the Rich”). In the last 500 years, very little has changed in Fuggerei. The city within the city contains 67 kempt houses with 147 flats, a church, and a fountain. The rental fee is the lowest in the world—1 euro a year. All Fuggerei dwellers have to adhere to strict requirements; they have to be genuinely poor, well-behaved, Catholics, and born in Augsburg. In addition, they have to pray for the Fugger family three times a day.

Late at night, in my room at Hotel am Rathaus, I treated my stubbornly blue and swollen ankle to a new portion of ice, took some more painkillers, and fell asleep in happy anticipation of the major goal of my trip: Schloss Neuschwanstein, a fairy tale castle that inspired Tchaikovsky to create “Swan Lake.” But first, I had to get there….

Early in the morning, right after our hotel breakfast, Mr. Balikci and I were on our way, exploring more beautiful towns of the Romantic Road. 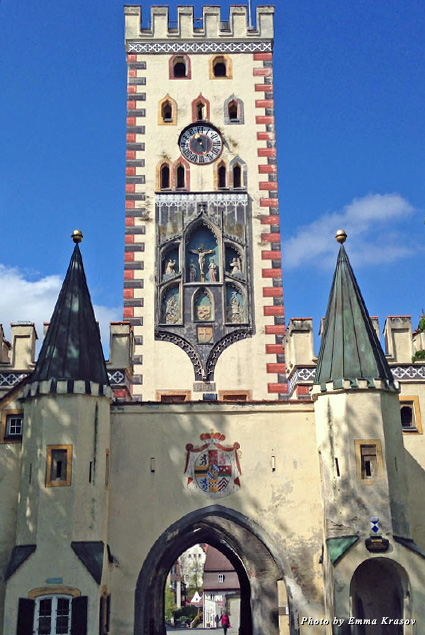 In Landsberg am Lech, founded more than 850 years ago by Henry the Lion, the elaborately decorated façade of the 1700 town hall bears Dominikus Zimmerman’s stucco work and icon-like portraits representing the virtues of a town councilor: Honor, Bravery, Steadfastness, and Courage.

In Schongau, the largely intact town walls from the 13th and 15th to 17th centuries stand witness to the town’s rich history as well as its Gothic former town hall and baroque decorations of the Parish Church of the Assumption of the Virgin Mary.

Schwangau, the “Village of Royal Castles,” is surrounded by four lakes: Alpsee, Bannwaldsee, Forggensee, and of course, Schwansee (“the Swan Lake”). In this mountainous village, I said goodbye to Mr. Balikci, who safely delivered me to the Hotel Weinbauer and left for his next route driving the Romantische Strasse Coach.

I had 15 minutes before my next tour and spent them icing my ankle and deciding what was more important: taking painkillers or paying attention to my newly acquired stomachache. At the arrival of my tour guide I forgot all my troubles—we were heading to the Neuschwanstein Castle! 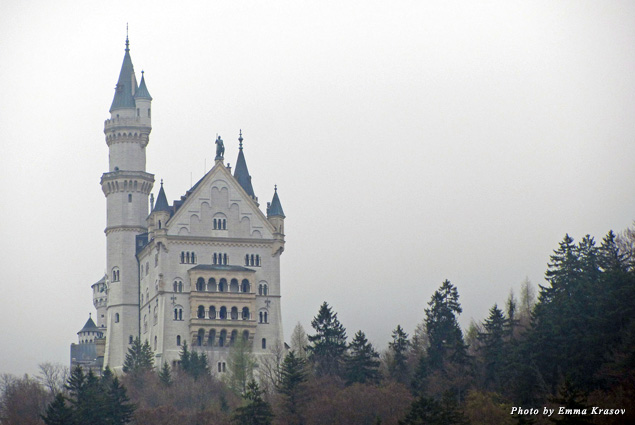 I recognized its towers and crenellations from afar. Built by King Ludwig II from 1869 to 1886, the castle on a mountaintop above the Pöllat Gorge gradually arrived from a fog over a darkened forest beneath. Even besieged by tourists, grouped and numbered according to their tour time slots, it maintained its mysterious appeal, romantic grandeur, and dreamlike architectural wonder.

Limping and heavily leaning on my walking stick, I braved the spiral staircases of all the five stories of the castle, first up then down, trying not to miss anything from a brief English-language tour.

The inner facilities of the castle are lavishly decorated with paintings depicting the legends of Lohengrin, Tangeiser, and Parzival. Every room bears multiple images of swans—from embroidery patterns to life-size porcelain figures with meticulous detailing. The Byzantine-style chapel has domed niches covered in gold leaf, and a chandelier fashioned after a bejeweled crown. In the royal bedroom, scenes from “Tristan and Isolde” cover the walls, and blue silk brocade curtains conceal the King’s bed with woodcarvings of exquisite workmanship. No wonder the castle is visited by approximately a million and a half people a year. 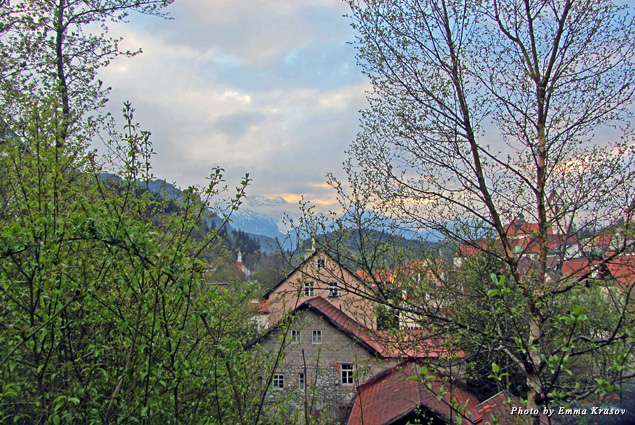 In the nearby Füssen, my tour guide showed me the late-Gothic streets and squares of the old town center, a former Benedictine Monastery of St. Mang, and a sign written over a gate on the outskirts of the town, “The End of the Romantic Road.”

I won’t go into details about my trip back home, when in every airport security agents tried to take away my helpful alpenstock because of its sharp metal tip. “Sure, take it,” I said, hopping on one foot. “I can make it without any support all the way to San Francisco!”

When I finally arrived at my doctor’s office, still leaning on my trusty souvenir, a nurse brought a wheelchair in the X-ray room and said, “Get in. You’re not walking anywhere anymore.”

Strangely enough, I experienced a feeling of relief, even though a minor bone in my ankle appeared to be broken. I was glad I hadn’t succumbed to the circumstances and absorbed as much as I could along the magical Romantic Road.