A Weekend in Long Beach 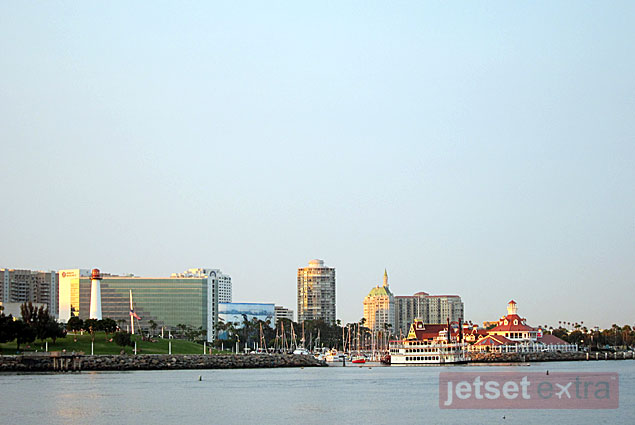 Nestled between Los Angeles and Orange County, Long Beach is the seventh-largest city in California and one of the country’s top maritime centers. It is composed of many neighborhoods, including downtown Long Beach, Shoreline Village, Bixby Knolls, Belmont Shore, and Craftsman Village. I’m no stranger to Long Beach, but there was much I hadn’t yet had an opportunity to explore, so I jumped at the chance to spend the weekend there as a guest of the Long Beach Area Convention & Visitors Bureau. The invitation was extra enticing since our destination was barely be an hour-long drive from Los Angeles on a traffic-free Saturday morning. 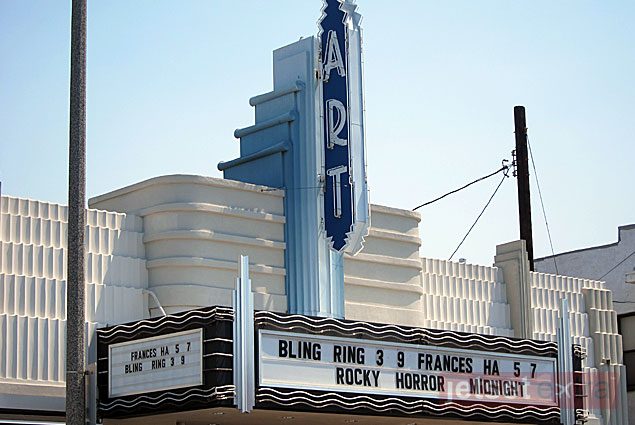 After giving our legs a good stretch browsing the shops along 4th Street, we hopped back in the car and headed to the legendary Queen Mary, which made her maiden voyage in 1936 and has been permanently docked in Long Beach since 1967. We began in the lower levels of the ship, following a self-guided tour detailing the history of the Queen Mary that gave us a glimpse of the engine room and replicas of the ship’s dining rooms and bedrooms. 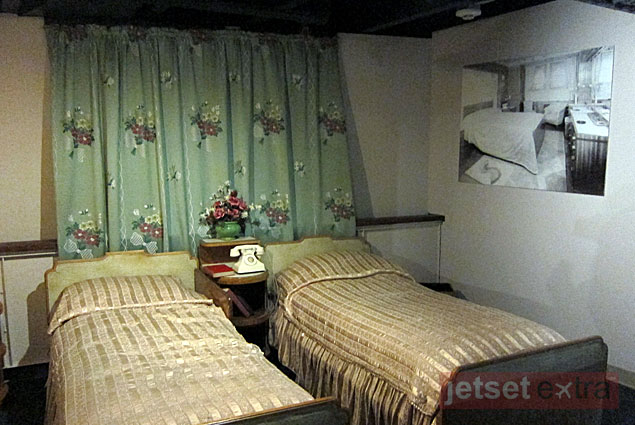 After learning all we could about the Queen Mary and its origins, we headed upstairs to check out the view and have a cocktail at one of my favorite places in Long Beach, the Observation Bar & Art Deco Lounge. Embracing 1930’s style, the bar originally served as the first class lounge and continues to entertain guests with signature drinks and small plates. Friday through Sunday the bar hosts live music and entertainment, showcasing local artists in styles ranging from jazz and blues to Top 40.

Our final stop at the Queen Mary was the exhibit “Diana: Legacy of a Princess.” The collection of gowns, photographs, letters, and memorabilia provides not only a glimpse of Princess Diana’s life as a member of the British royal family but also gives an in-depth look at the family members who visited or sailed aboard the Queen Mary, including King George V and Queen Mary, the Duke and Duchess of Windsor, Queen Elizabeth, and Queen Elizabeth II. 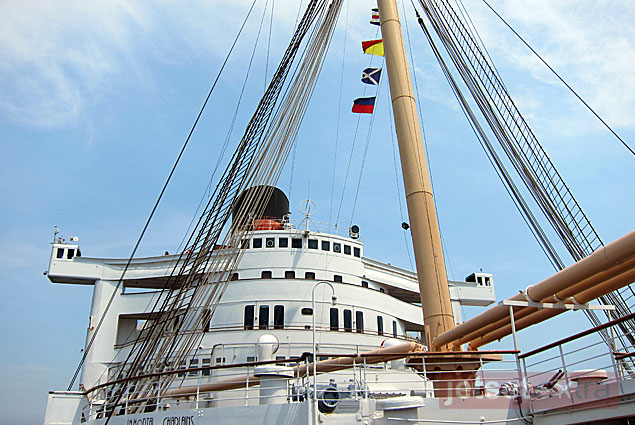 From the Queen Mary, we made a short drive to our accommodations for the night, the Hotel Maya. Latin America meets Southern California at this DoubleTree by Hilton property situated across the harbor from downtown Long Beach. Our corner room was spacious and comfortable—and had a wonderful view of the Queen Mary and downtown. 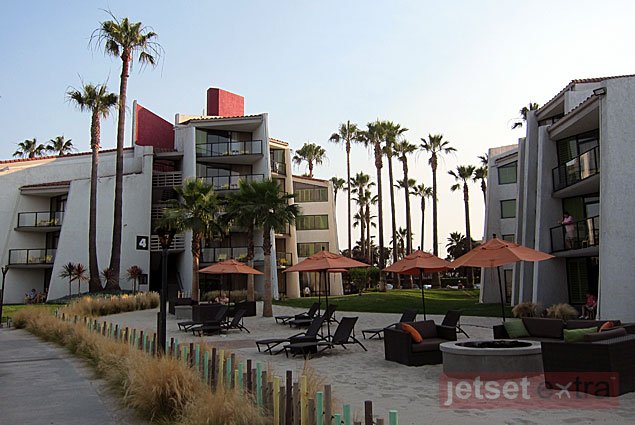 It took all our effort not to settle into the chairs on our balcony and call it a day, but we had places to go and bikes to ride. Hotel Maya offers bicycle rentals for its guests so we hopped on two and headed over the bridge to Shoreline Village and the Pike at Rainbow Harbor, two great venues for dining, shopping, and entertainment. The Shoreline Pedestrian Bike Path was well marked and easy to navigate; it’s a great way to get from point A to point B or to just get some exercise in while enjoying the beautiful scenery. We also took a spin around the lake beside the Hyatt Regency Long Beach and the Long Beach Convention Center, which was lovely.

For non-Hotel Maya guests, Long Beach recently partnered with Southern California-based Bike Nation to launch one of California’s largest bike share programs. The first of 250 kiosks and 2,500 bikes will arrive in downtown Long Beach by the fall, allowing visitors and residents to rent and return bikes anywhere within a network of stations. A single, 24-hour membership is priced at just $6, with discounts for three-day, weekly, monthly, and yearly rentals. 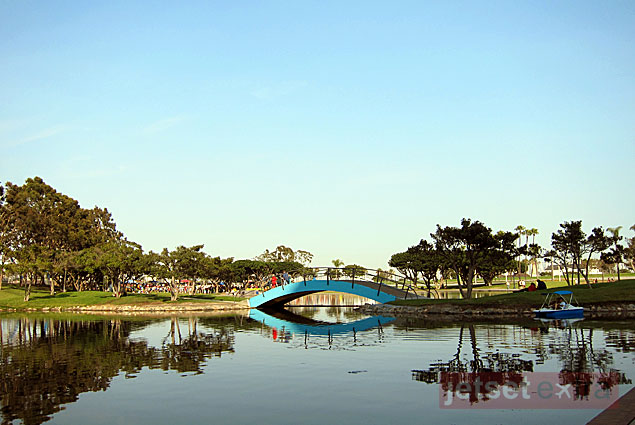 After our bike ride around downtown, we returned to the hotel and headed straight for the pool to get a little relaxing in before dinner. It felt so good to take a dip in the cool water; I wished I had more time to spend there so I could have taken advantage of one of the floating cabanas. 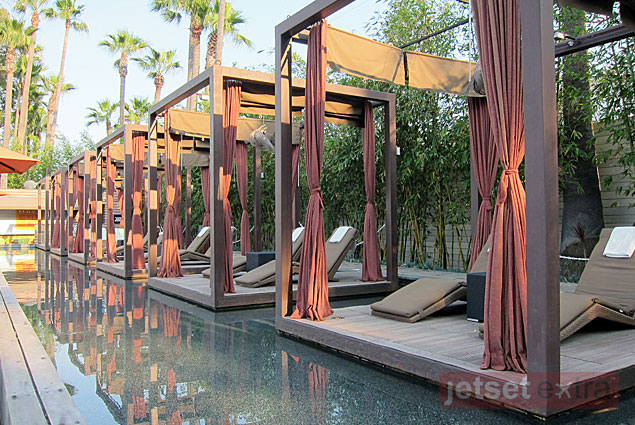 Dinner at Hotel Maya’s on-site restaurant Fuego was enjoyable from start to finish. It began with a table for two at the edge of the patio overlooking downtown Long Beach and the Queen Mary. From there, we toasted to a successful Saturday in Long Beach with a Playa Largo Margarita—house mix, silver tequila, fresh lime juice, and triple sec on the rocks—for Mike and a glass of Colomé Malbec Valle Calchaqui from Salta, Argentina, for me. We settled our growling stomachs with house guacamole, made with lime, cilantro, shaved red onion, and pico de gallo, before our entrées arrived: ropa vieja, a Cuban-style braised flank steak with black bean purée, fried corn tortillas, cabbage jalapeño cilantro slaw, caramelized plantains, and agave cream sauce, and coffee-rubbed filet mignon, an 8-ounce filet served with ancho chili sauce, mushroom ragout, and sweet potato purée.

We were filled to the brim with goodness, but still made a little room for dessert. How could we not when coconut flan was an option? The dish was delicious, topped with cajeta caramel sauce, cinnamon crisp, and seasonal berries. 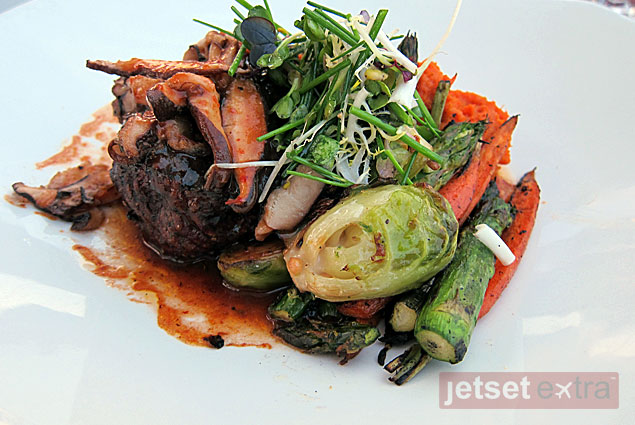 On Sunday morning, we said goodbye to the Hotel Maya and made our way to the Aquarium of the Pacific for the Behind the Scenes Tour. An additional cost on top of entrance to the aquarium, the tour gives visitors a look at daily operations in areas not normally open to the public. We fed fish above the Tropical Reef, the aquarium’s largest exhibit, and learned fun facts about the 11,000 animals that live at the aquarium.

After the tour, we paid a visit to the adorable Magellanic penguins at the June Keyes Penguin Habitat, a permanent exhibit and home to the first penguins in the aquarium’s collection. We also stopped by to see the sea otters, sea lions, and several other animals in the aquarium’s many exhibits.

It was a jam-packed weekend and there was still more we hadn’t had the opportunity to see. Good thing Long Beach is never too far away; I know we’ll be planning a trip back there soon.