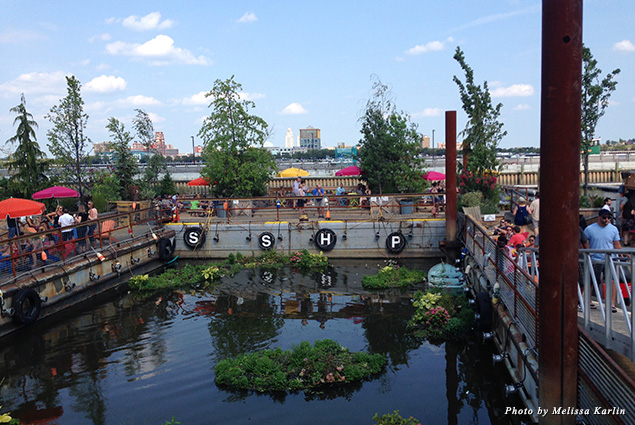 Philadelphia is a city of a several personalities. On the one hand, it is a purely urban destination. One the other, it is a colonial masterpiece and a cornerstone of American history. It is a unique combination of elegance and raw urbanity. Exploring Philly with my good friend Valerie, who grew up in a Philadelphia suburb, offered me insights to the East Coast American city—and also ended up surprising both of us. Upon exploring the city I came to the conclusion that Philadelphia is really cool and layered with different histories creating an experience similar to New York, but with a less intense visitor requirement quota.

Our first stop was the Liberty Bell Center because, well, we had to see the Liberty Bell. It is über touristy, with swarms of people crowding around the cracked piece of ironwork forcing their children to stand still for photos. However, I have to recommend it. It’s a quintessential part of American history, and though the line is often very long it moves very quickly. Like Times Square or the Hollywood sign, you should probably see it once, but at least this visitor requirement is a lot more meaningful. The whole display at the center has a real social justice standpoint to it; the exhibit surrounding the bell not only delved into the history of the object and the American Revolution but also expanded other protest movements in American history, from the Suffragette movements to the Stonewall Riots and Black Lives Matter. It was quite current, taking the symbolic nature of the bell to tell a story of the power of the American people and its history of resistance against inequality. 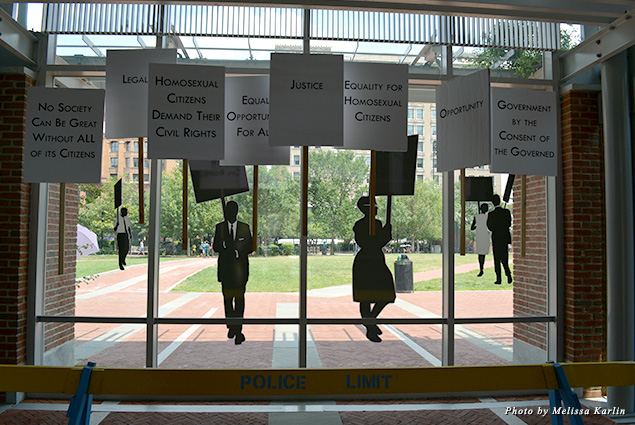 For art lovers the city offers many fantastic institutions. There’s the Philadelphia Art Museum, which is also the site of Rocky’s famous stair-running scene, and just outside the city proper in University City is the Institute of Contemporary Art, which features exciting and engaging exhibitions. Without a permanent collection, the small institution can rotate its displays and allow for an immersive art-going experience. While I was there, one of the exhibitions featured a maze in which one had to crawl around in to reach iPads with the story of the artwork. It was a lot of fun and full of excellent representative surprises.

For another art experience that is not only home to some of the modern and ancient masterpieces important in the history of art but also challenges conventional display, visit the Barnes Foundation. This is a beautiful art museum in the contemporary modernist style, complete with beautiful entry fountain and abstract sculpture. Long planes combine to create the building’s structure, like a floating, colorless Mondrian.

The museum began its life outside of the city, in Merin at the home of Dr. Barnes. He invested in modern art in the early 20th century and was revolutionary in his approach to its display. In fact, the way in which he displayed artworks of differing eras and locations, combining the modern, ancient, and non-Western into complementary displays is still challenging the traditional notions of curatorial practices today. It is an awe-inspiring sight to experience an immense collection of West African masks, Modigliani, Renoir, and Matisse alongside Medieval European works. 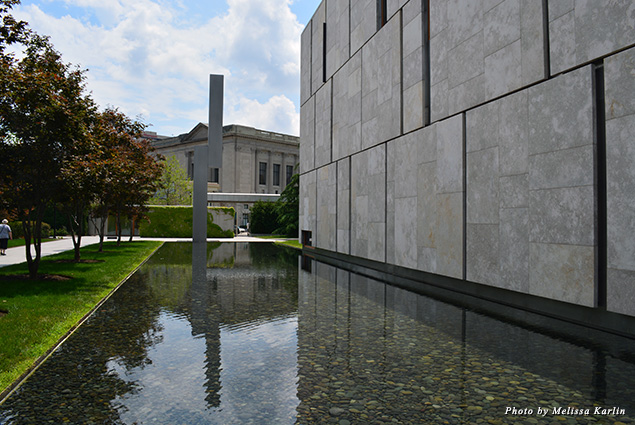 However, the Barnes is actually quite a contested site in the art world. It is incredibly entrenched in Philadelphia politics, as its namesake never wanted the institution to move into the space in which it currently resides. But don’t let this stop you from enjoying the legacy of the works and the manner in which they are displayed. It might have been moved against the wishes of its collector, but its location in the center of Philadelphia makes the site much more accessible to a larger amount of people who can also visit other nearby museums, including the Philadelphia Museum of Art and the Franklin Institute.

Having gotten our fill of art and culture out of the way early, food was definitely a must for our next stop. South Street is one of the main drags for food, drinks, shopping, and the urban experience that one may think of when first picturing Philadelphia. It is grimy but cool; it’s here where you can grab a classic Philadelphia cheesesteak from Jim’s Steaks and a water ice (the Philly name for Italian ice) from Rita’s.

For an outdoors experience in the summer, there is a relatively new offering that is delighting locals and visitors alike: Spruce Street Harbor Park. This waterfront park features food by the Garces Group (at the time of publishing) in old shipping containers, as well as an artificial beach, hammocks, and more lounging spaces for those warm days from May to September. It is a really fun and relaxing way to spend the afternoon along the Delaware River. Valerie and I were surprised that this outdoor space and celebration of the season existed in Philadelphia. It reminded us of the kind of riverfront experiences one can expect in London or New York. It is a great use of outdoor space in a city not known especially for its waterfront. But maybe this will change as the Spruce Street Harbor Park hopefully continues its summer offerings for many years to come. 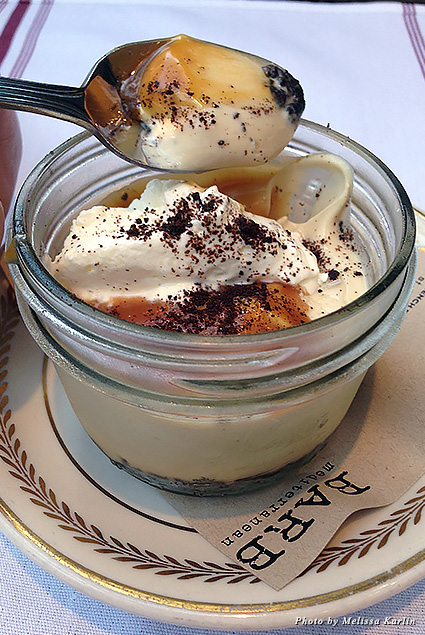 For something a bit more refined gastronomically, head to a section of the Washington Square West neighborhood known as the Gayborhood to find the restaurant Barbuzzo. This establishment is home to what was voted the best dessert in Philadelphia: a salted caramel budino with dark chocolate crumble.

Though we shared this pudding-meets-panna-cotta heavenly wonder, I could have easily devoured all of it by myself. It was the perfect combination of sweet and salty, with neither one overpowering the other. We also enjoyed some of the restaurant’s pizza and antipasti, which much like the aforementioned dessert, was delicious. The establishment excelled at high quality, fresh Italian Mediterranean fare.

Representing the other side of the Mediterranean Sea is Zahav, a brilliant establishment that might have better Israeli dishes than anything I actually had in Israel—and the food there is fantastic. After first hearing about this restaurant months before my Philadelphia trip, I mentioned it to Valerie. Her reply: “I’ve been trying to go for years!” My visit became a perfect excuse for her to finally get in, and for me to try the place I had seen once on television.

As a writer describing my dining experience to you, I can only give a hint of the tastes and delights that we had here one evening in July. From the comforting warm laffa (fresh fluffy pita bread) dipped into creamy and light hummus to the array of mezze and salatim (small salads of varying kinds, including eggplant, beets, and peppers), it was all perfect—and this was just the start of our meal! The restaurant offers a set menu of salatim, dips, mezze, grills, and dessert, which I highly recommend as it offers a great introduction to the restaurant and the style of cooking. 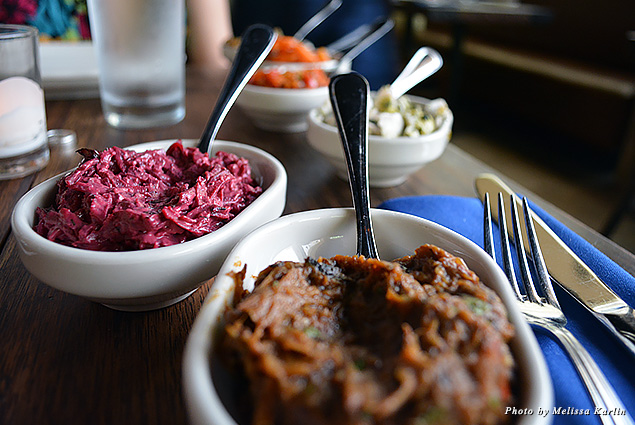 As a surprise, they also brought out a small dish in the middle of our meal, on the house. That evening it was an egg and whitefish dish that reminded me of something one might get at a deli but with a Middle Eastern twist and elevated to the point of one Michelin star. And the duck kebab—oh, the duck kebab—was a perfectly cooked kofta (meatball) made of duck as opposed to the traditional lamb. This small grill that came out toward the end of our multi-course experience was rich and oozing with flavor from the spices.

The cuisine and the gastronomic experience at Zahav take what one can experience at any Middle Eastern restaurant and elevate it through its approach. The place is incredibly busy, so be sure to make a reservation in advance. I made our reservation a week ahead of time and could only get a 5:15 or 8:45 spot on a Sunday night. But after experiencing a meal at Zahav I understand why it is so busy. Even writing about it now, I can taste the layers of flavor, bursting across my taste buds. I wish I had a bowl hummus with me as I share this story. 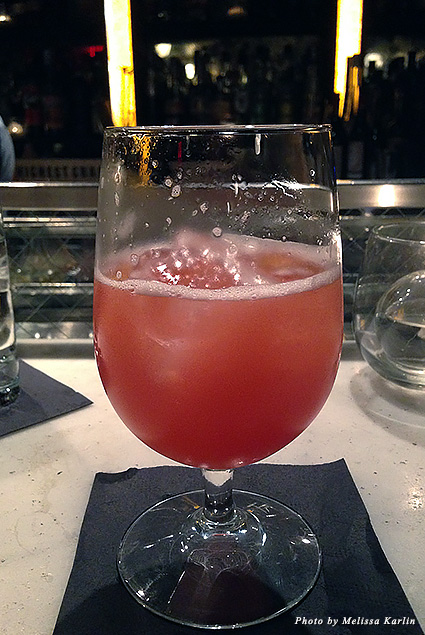 Our last stop for the night was Franklin Mortgage and Investment Company, a cool, speakeasy-like bar. Who doesn’t love a good speakeasy with dedicated and creative bartenders? The bar is located in a basement and is decorated with a kind of mock early 20th century aesthetic. It was the drinks, though, that won me over. I love going to a bar where I can tell the person behind the counter what I’m in the mood for and they can deliver exactly that. A visit here was the perfect way to end my introduction to Philadelphia, with good drinks and a good friend showing me the way.