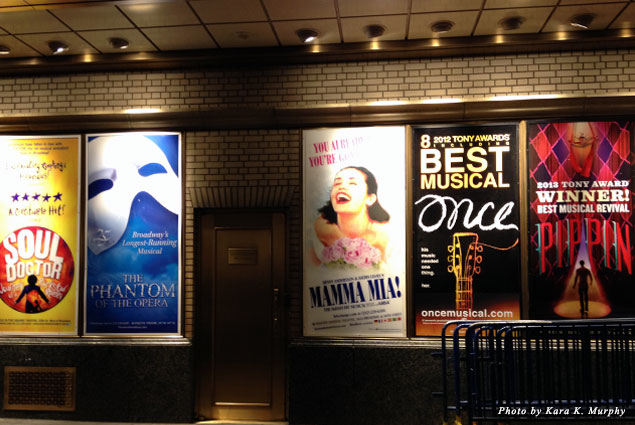 The shows on Broadway take center stage in New York City’s Theater District, an area of Midtown Manhattan bustling with outstanding talent and unmatched energy. However, not to be missed is the culture surrounding such a legendary theater district, from Shubert Alley to storied restaurants and bars. So, next time you plan a trip to New York, consider setting aside a day to explore all Broadway has to offer.

Before you set off on your Broadway tour, first things first: secure tickets to your show of choice. Will it be this year’s Tony Award winner (and a personal favorite of mine), “Kinky Boots”? Or how about “The Lion King”? “Once”? “Motown The Musical”? “Rent”? “The Phantom of the Opera”? There really is something for everyone, and it’s a good idea to do research before your trip. The Broadway Collection offers a description of productions that are currently showing. Make a list of at least three shows you’re interested in seeing. That way, if you don’t get tickets to your No. 1 choice, you’ll have two others as back up. 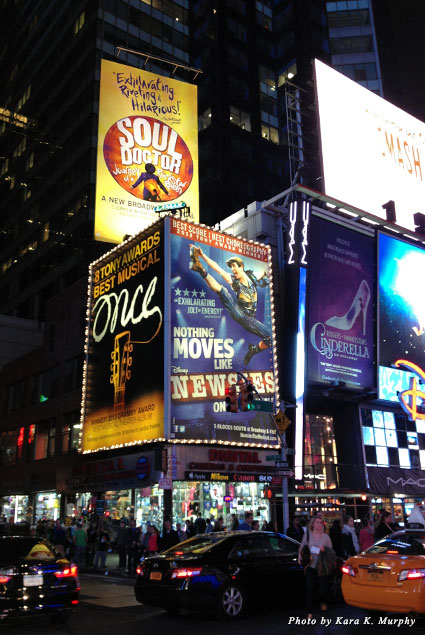 If you have your heart set on seeing a specific show, or if you are in NYC for only a day or two, it’s best to get tickets beforehand so you don’t miss out. Tour operators and Telecharge.com are both good places to start. Traveling in a group? Look into group rates (Telecharge has them for as few as eight people).

Willing to wing it to snag a great deal? Then TKTS is a great bet. A discount ticket booth operated by the Theatre Development Group (TDG), TKTS offers select tickets to Broadway and Off-Broadway plays at up to 50 percent off and has three locations in the city (Times Square, South Street Seaport, and downtown Brooklyn). There’s even a TKTS app to help you out. The shows with tickets up for grabs change daily, so having several choices will come in handy if going this route. Plan to arrive early and be sure to read the website carefully for all of the must-know details. 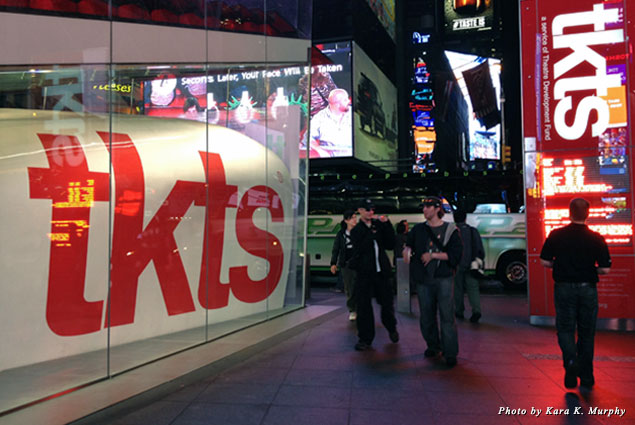 Once you’ve taken care of the tickets, a great way to get the lay of the land is to go on a self-guided walking tour of the Theater District. From east to west it runs from 6th to 8th Avenues, and from north to south it runs from 53rd to 40th Streets (including Times Square). Of course, there are theaters beyond these parameters, so don’t be afraid to venture a little farther. Times Square is a good place to start (and it’s accessible by many subway lines). There, at Broadway and 47th Street, you’ll find the Times Square location of TKTS and the Red Steps, which offer a great spot to sit and take in the bright lights and marquees in Times Square. It’s also a great photo op. 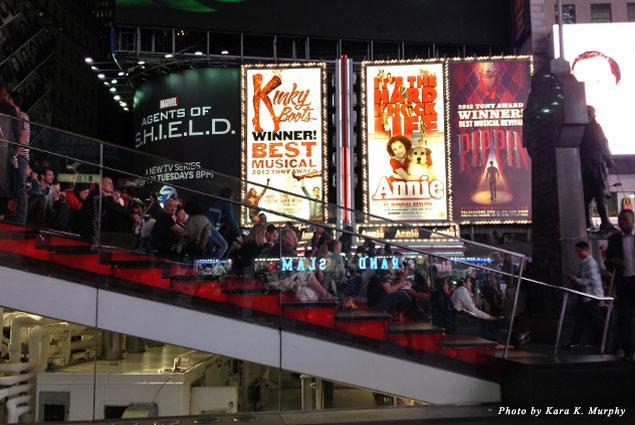 Want the view without the hustle and bustle? Grab a drink at the R Lounge in the Renaissance Hotel. Located right in Times Square, it offers a fantastic panoramic view of the marquees and billboards in an inviting environment.

From there, work your way uptown or downtown—just follow the marquees. Midtown Manhattan is always crowded, but if you want to get some great photos and avoid some of the foot traffic, you might want to do this before people start arriving for the shows. Plus, you’ll want to arrive on time for yours.

Be sure to walk down the legendary Shubert Alley on your tour. A historical landmark at the heart of the Theater District, it was built in 1912 to serve as a fire exit between the Shubert and Booth Theaters and the Astor Hotel. It’s between (and runs parallel to) Broadway and 8th Avenue, linking 44th and 45th Streets. Many now see the pedestrian walkway as the center of Broadway, and it serves as a thoroughfare for theater professionals—many of them pass through on the way to Sardi’s, a famed restaurant that has served theatergoers since 1923.

Note: If you’re visiting in the summertime, be sure stop by Broadway in Bryant Park while on your walking tour. Popular On- and Off-Broadway shows perform some of their biggest hits at this free, early afternoon event. It’s a great opportunity to have a picnic in the park and enjoy a taste of Broadway. To get an idea of what’s in store for next summer, take a look at the 2013 schedule.

Once you’ve gotten in a bit of walking, sightseeing, and a drink or two, a pre-theater dinner is definitely in order. Sardi’s is a great option and so is 54 Below. Dubbed “Broadway’s Nightclub,” 54 Below offers a delicious pre-theater dinner, a nightly lineup of performers, and after-dinner drinks in an elegant yet intimate setting. If you have time before your show starts, stay for the Konrad Paszkudzki Trio—they entertain diners from 6:30 to 7:30 p.m. with no cover charge. If you’re not heading to a Broadway show, stick around (but plan ahead, because performances must be booked in advance); 54 Below has up to three live shows nightly featuring Broadway stars such as Patti LuPone and the cast of “Matilda.” 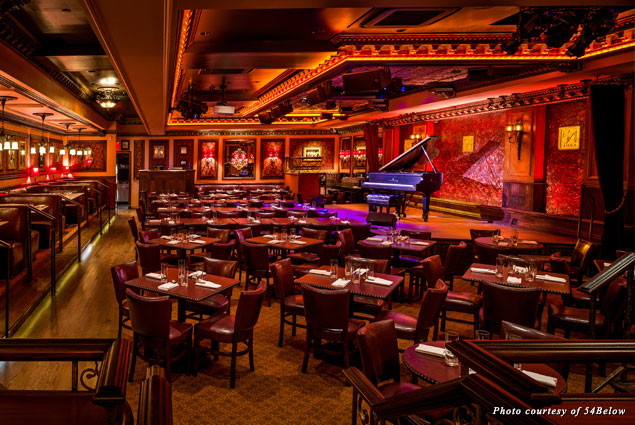 Allow yourself plenty of time to get to the theater—the last thing you want to do is miss the opening of the show! Plus, you might want to order a drink or a snack at the bar before the show starts. There are so many great shows playing right now, you can’t go wrong. If you’re seeing “Kinky Boots,” you’re in for a spectacular treat. In all honesty, I was skeptical. I’d seen the ads for the show on television and on the subway, but I wasn’t drawn to the story, despite being a child of the eighties and a fan of Cyndi Lauper (she wrote the music). A quick scan of the Yelp reviews made me think otherwise. With 34 reviews and a four-and-a-half star rating, I figured it might be worth a look-see.

Well, the Yelpers are right. “Kinky Boots,” the story of a shoemaker trying to save his father’s business, is absolutely fantastic. It’s fun (but has enough emotion to draw you in), it’s well written, the music is great … I had a huge smile on my face during the entire show, and I left in the best mood. If you’re looking for an all-around good time and a show with universal appeal (for adults, not for children), “Kinky Boots” is for you. 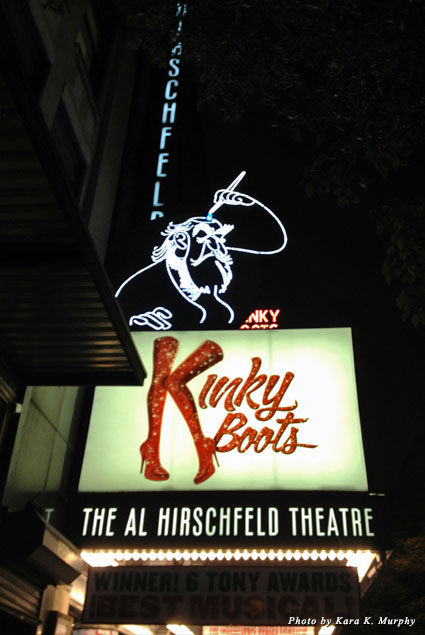 After a show, there are plenty of spots in the Theater District you might want to check out for a nightcap. After seeing “Kinky Boots” at the Al Hirschfeld Theatre, my friend and I walked past Nizza and, on a whim, decided to stop. The pasta is delicious (with a separate gluten-free menu), and the atmosphere is airy and energetic—the perfect place to discuss our mutual love of “Kinky Boots.”

If you’ve already eaten but still want to stay within the theme of the day, try a cabaret club. A great option in the area is Birdland, which features mostly jazz performers although Broadway actors do perform there frequently. Ready to venture outside of the Theater District? Other options include The Duplex in the West Village and Café Carlyle in the Upper East Side.